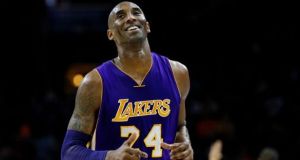 The Washington Post reporter, Felicia Sonmez, who referred to a sexual assault charge against Kobe Bryant on Twitter in the hours after his death has been cleared to go back to work Photo: Matt Slocum/AP Photo

The Washington Post reporter who referred to a sexual assault charge against Kobe Bryant on Twitter in the hours after his death has been cleared to go back to work.

More than 300 of her colleagues rallied to her defence Monday, adding their names to a letter addressed to The Post’s executive editor, Martin Baron, and its managing editor, Tracy Grant. In the petition, they argued that Sonmez had not violated the newspaper’s social media guidelines, a set of rules asking Post journalists not to share opinions online.

On Tuesday, the paper issued a statement from Ms Grant saying that, after a review, it had concluded that Ms Sonmez “was not in clear and direct violation of our social media policy.”

The statement also referred to her tweets as “ill-timed” and continued: “We consistently urge restraint, which is particularly important when there are tragic deaths. We regret having spoken publicly about a personnel matter.” Ms Sonmez’s first tweet on Bryant included a link to a 2016 Daily Beast article on the 2003 felony sexual assault case against the former basketball star, who died in a helicopter crash Sunday.

Before the newspaper suspended her, Mr Baron sent her a brief email saying she had shown a “real lack of judgment” with the tweet.

Ms Sonmez said in an interview that she had purposely not added any commentary of her own to the tweet linking to the Daily Beast article. “Because The Post does have policies governing these things, all I did was tweet out a link to the story,” she said. “I didn’t think it was my place to provide any further commentary.”

In two follow-up tweets, Ms Sonmez described the name-calling, death threats and rape threats she had received because of the first tweet. The reporter said she had followed The Post’s safety protocol by alerting her editors about the threats.

Ms Grant instructed her to delete the tweets before informing her that she was being placed on paid administrative leave while the newspaper reviewed her Twitter posts. After Ms Sonmez saw that her home address had been published online, she checked into a hotel. The Post covered the cost of the room.

On Tuesday evening, Ms Sonmez issued a statement on The Post’s handling of the matter. “I hope Washington Post newsroom leaders will not only prioritise their employees’ safety in the face of threats of physical harm but also ensure that no journalist will be punished for speaking the truth.”

In an article posted Monday, Erik Wemple, The Post’s media columnist, called the decision to suspend Ms Sonmez “misguided.” The NewsGuild, the union that represents Post newsroom employees, was behind the letter that was sent to Mr Baron and Ms Grant.

Twenty-four hours after it was drafted, more than 400 Post employees, including investigative reporters David Fahrenthold and Dana Priest, fashion critic Robin Givhan and books critic Ron Charles, had added their names to it.

In the case referred to in Ms Sonmez’s Twitter post, Mr Bryant was arrested and charged with felony sexual assault after an encounter with a 19-year-old hotel worker in Vail, Colorado. The criminal case was dropped in 2004, and the following year, Mr Bryant reached a private settlement with the accuser. The terms were not disclosed.

In the letter, Post journalists described Ms Sonmez’s tweet as “a statement of fact” and criticised their bosses for failing to take into account Sonmez’s personal history. The reporter was one of two women who accused Jonathan Kaiman, a Beijing bureau chief of The Los Angeles Times, of sexual misconduct. After The Times conducted an investigation in 2018, Mr Kaiman resigned.

When Ms Sonmez used her Twitter account to object to how the story of her encounter with Mr Kaiman was portrayed in the news media, The Post gave her a warning about her social media activity. Ms Sonmez said she had filed a grievance over the warning through the NewsGuild, saying that she was defending herself against errors.

Mr Baron and other top editors sent a memo to the staff after announcing the paper’s decision on Ms Sonmez. “The events of the last few days have surfaced concerns felt widely in the room,” it said. After noting that The Post tries “to act quickly and thoroughly to protect and defend our colleagues from intimidation and threats,” the statement said that the paper’s “policies on the use of social media – which date from 2011 – are in need of an update.” – New York Times