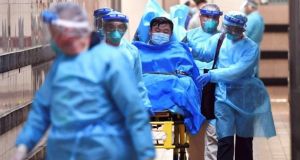 Medical staff transfer a patient of a highly suspected case of a new coronavirus at the Queen Elizabeth Hospital in Hong Kong on Tuesday. Photograph: Cnsphoto via Reuters

Major airlines cancelled or cut services to mainland China on Wednesday as the World Health Organisation (WHO) called an urgent meeting over whether the coronavirus epidemic that has claimed 132 people and infected more than 6,000, should be declared a global health emergency.

Last week a WHO committee stopped short of declaring the outbreak an international public health emergency, which would have resulted in a wider co-ordinated action plan to attempt to stem the spread of the pathogen.

WHO chief Tedros Adhanom Ghebreyesus said in a tweet on Wednesday he had decided to reconvene the committee, and the organisation “deeply regrets the error” in its report last week that referred to the global risk of the outbreak as “moderate” instead of “high”.

British Airways suspended all flights to and from mainland China on Wednesday after the British foreign office warned against “all but essential travel”.

Indonesia’s Lion Air and South Korea’s Air Seoul have also cut all services to China, while several other carriers, including United Airlines and Cathay Pacific, have drastically reduced their flight schedules.

German carrier Lufthansa cancelled all flights to China as health authorities confirmed the country’s first four cases of the coronavirus in Germany, all employees at a Bavarian car parts firm.

The Department of Foreign Affairs also updated its travel advice on Wednesday to Irish citizens to avoid non-essential travel to China.

The Irish ambassador to China, Eoin O’Leary, advised the Irish community there of the travel warning in an email on Wednesday.

“We also advise that if you are thinking of leaving China, it would be better to do so sooner than later,” he said.

“We are doing this primarily in case there are further restrictions on travel to, from or within China by the Chinese or other authorities.”

The epidemic’s reported death toll jumped by 26 on Wednesday to 132.

The number of confirmed cases of the rapidly spreading virus has hit 6,086, surpassing the number of Sars infections in China in the 2002-03 epidemic that killed 774 people worldwide.

Suspected cases also rose overnight by more than 2,000 to a total of 9,239, Chinese health officials said.

While the coronavirus is spreading faster than Sars, its current mortality rate of 2.2 per cent is much lower than the Sars level, which stood at about 10 per cent.

Like Sars, the coronavirus is a particular risk for the elderly and those with underlying health issues.

The Irish embassy in China was not currently planning to evacuate staff, and they were not warning citizens to leave, Mr O’Leary said.

“I would stress that we are not advising people, who have no plans to leave China, to leave and we as an embassy and consulate team plan to remain in China on the basis that this current situation is not of sufficient seriousness to leave,” he wrote.

The embassy has made contact with eight Irish nationals under lockdown in Hubei to discuss evacuation options, but at this point they are opting to stay in China.

The United States and Japan flew citizens out of Wuhan on Wednesday, and many other countries were preparing similar arrangements.

Australia said it would fly some citizens out of the stricken area and then quarantine them for 14 days on Christmas Island, a remote island close to Indonesia and 1,931km (1,200 miles) from the mainland, best known for housing asylum seekers.

China’s women’s soccer team was quarantined in Australia on Wednesday ahead of an Olympic qualifying tournament, as they had travelled through Wuhan last week.

The European Union is arranging to repatriate about 600 citizens from 14 other EU countries this week, with European Crisis Management Commissioner Janez Lenarcic saying the virus situation “is likely to get worse before it gets better.”

As the number of infections continues to soar - with confirmed cases in 15 countries around the world - White House officials said they have not ruled out suspending all flights between the United States and China until the outbreak comes under control.

Since China released the genome sequence of this coronavirus early in January, several countries have been working on vaccines, but researchers warned it could take months or even years before human trials could be conducted.

Scientists in Australia said they had grown the coronavirus from a patient sample, which they said will be “a game-changer for diagnosis”.

An official from the China Centre for Disease Control and Prevention said it believed their unprecedented prevention and control measures were starting to have an impact.

“Most of our experts believe we will see a peak within 10 days and the situation will improve then. The virus spread could even start to slow before that,” he said.