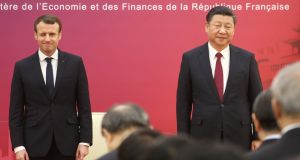 One of the thorniest questions facing French president Emmanuel Macron is how to deal with dictatorships and what the French sociologist Edgar Morin calls “post-democratic authoritarians”.

Macron evoked the problem of “illiberal democracy” in a speech at the Élysée this month. The term was coined by the US journalist Fareed Zakaria in Foreign Affairs magazine 20 years ago and refers to leaders who win elections, then disregard the fundaments of democracy. Macron did not name names, but clearly alluded to Vladimir Putin, Donald Trump, Recep Tayyip Erdogan and Viktor Orban.

“A growing temptation of illiberal democracy exists on the frontiers of Europe and within Europe,” Macron said. The human progress constituted by democratic freedoms, and the combination of free markets with the quest for social justice, has been “fissured” by leaders who are obsessed with nationalism and protecting their countries from perceived threats, Macron said.

“This illiberal tendency, we must not take lightly. It will doubtless constitute one of the battles that France and the EU will have to fight,” he said.

It was his duty “to dialogue not only with those who agree with us”, Macron said. He has received Putin and Erdogan in grand style before excoriating them in press conferences. Last May, he denounced pro-Kremlin media RT (Russia Today) and the Sputnik agency as “organs of lying propaganda”, in front of Putin. On January 5th, he publicly condemned widespread violations of personal freedoms, in front of Erdogan.

But the challenges raised by Russia and Turkey are particularly close to Macron, France and Europe. RT and Sputnik spread ugly rumours about Macron and his wife during the presidential campaign. Macron personally intervened to obtain the liberation of two French journalists imprisoned by Turkey. And he wanted to end the “hypocrisy” surrounding Turkey’s application to join the EU.

Paradoxically, Macron has been harder on “illiberal democrats” than on dictators. Until now, Le Monde noted, democratic leaders had three options. They could freeze relations with the most disreputable regimes, meet pariah leaders discreetly on the sidelines of international summits, or embrace realpolitik and hold their noses while signing mega contracts for arms and nuclear reactors. One thinks of France’s relations with Saudi Arabia.

A ritual has set in, whereby human rights groups demand that Macron denounce abuses, then criticise him when he fails to do so. Though he was under pressure to raise the fate of 60,000 political prisoners in Egypt when he received Field Marshal Abdul Fattah al-Sisi on October 24th, Macron refused to “lecture” the dictator. Co-operation in the fight against jihadism, and Egypt’s purchase of €6 billion worth of French weapons, were apparently more important.

Macron’s treatment of al-Sisi was not an exception, as shown by Macron’s visit to China this week.

Liu Xiaobo, the Chinese Nobel laureat, died in detention last July. His ailing widow Liu Xia is kept under house arrest. A Chinese blogger was recently sentenced to eight years in prison for “subversion”, and a Tibetan has been charged with “incitement to separatism” for wanting to teach the Tibetan language to his children.

In five speeches over three days, Macron never uttered the words “human rights”. While visiting an art gallery in Beijing, he assured journalists he “raised these concerns” with President Xi Jinping in private. “I do not engage in megaphone diplomacy. I could please myself by giving lessons to the Chinese. It’s been done a lot. It is totally ineffective.”

China is overtaking the US as the world’s leading economic power, while France trails at sixth place. The French trade deficit with China runs to €30 billion annually. Yet foreigners are banned from owning more than 50 per cent of a Chinese company, or from investing in certain sectors. Last June, Macron upset free-traders within the EU by asking that Brussels stem what French finance minister Bruno Le Maire called “pillage investment”: the Chinese practice of buying up strategic industries in Europe to pilfer their technology.

Economic “reciprocity”, not human rights, was the byword of Macron’s trip to China. It appears to have paid off, in the form of dozens of contracts for airbuses and nuclear reactors, French beef and consumer products, totalling billions of euro. As with Macron’s earlier indulgence towards al-Sisi, it was a cold calculation based on national interest and pragmatism.

Macron has not found an answer to the Chinese combination of economic ultra-liberalism and crushing political oppression. He nonetheless sent subtle signals to his Chinese counterpart. After viewing the army of 3rd century terracotta soldiers in Xi’an, Macron noted that every statue “had a different face. There was an individual. Behind the power of your country there are billions of individuals.”

He said his meeting with contemporary Chinese artists gave him a glimpse of “a Chinese sensibility that expresses itself openly, freely, without being unaware of what may exist elsewhere”.