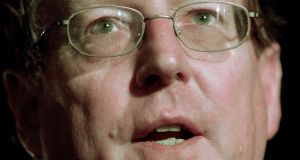 David Trimble has warned that any attempt to resolve the issue of the Border after Brexit by weakening Northern Ireland’s place in the United Kingdom would provoke a strong backlash from unionists.

The former Northern Ireland first minister, who is now a Conservative peer, said that Taoiseach Leo Varadkar and Minister for Foreign Affairs Simon Coveney had sometimes given the impression during recent Brexit negotiations that they sought an outcome that would come close to breaking up the union.

“I don’t want to suggest that there’s a danger of violence from loyalist paramilitaries. But do bear in mind that movement in that direction is going to have a political consequence.”

He told the Foreign Press Association in London the Irish government appeared to have drawn back from some of the most provocative proposals, including the idea of a special status for Northern Ireland after Brexit.

“The special arrangements were always going to be ones that moved Northern Ireland away from the United Kingdom. Not wholly perhaps, maybe only to a certain extent, but the movement would only be in that direction. And that would be most unwelcome to the unionists of Northern Ireland,” said the former Ulster Unionist Party leader, who backed Brexit in the 2016 referendum.

He said the language on Ireland agreed between Britain and the EU last month contained ambiguities and had not resolved the issue of the Border, adding that he was not optimistic about the prospects of doing so during the next phase of the talks.

He dismissed the role played by the EU in the peace process, remarking that Michel Barnier had appeared in Belfast for a photo opportunity a day before the Good Friday Agreement was agreed in 1998.

He suggested, however, that EU membership had helped to transform the Republic.

“It led to a rethinking by people in the Irish Republic of the nature of their society. The Irish Republic in effect turned itself into a modern European country rather than one that was in the past and under an ideology that wouldn’t pass muster today if it was looked at closely,” he said.