The official, an ex US marine and FBI special agent, claims he was asked downplay white supremacists threats 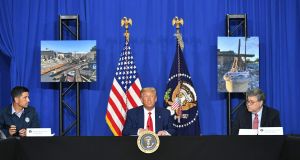 The whistleblower said in the complaint submitted that Chad Wolf (far left), acting homeland security secretary, instructed him in mid-May ‘to cease providing intelligence assessments on the threat of Russian interference in the United States’. Photograph: Mandel Ngan/AFP/Getty Images

A US homeland security official has filed a whistleblower complaint alleging that he was told to stop filing intelligence assessments on alleged Russian election interference to comply with White House policy.

Brian Murphy, who led the department’s office of intelligence and analysis for part of last year, also said he was asked to modify an assessment to make the threat posed by white supremacists appear “less severe” and to include information about violent “leftwing” groups.

Mr Murphy said in the complaint submitted on Tuesday that Chad Wolf, acting secretary of homeland security, instructed him in mid-May “to cease providing intelligence assessments on the threat of Russian interference in the United States, and instead start reporting on interference activities by China and Iran”. He claimed Mr Wolf said the instructions originated from Robert O’Brien, White House national security adviser.

The former US Marine and FBI special agent, who has spent more than 20 years in public service, said he declined to make the requested modifications and was effectively demoted after he complained internally.

Mr Murphy alleged he told senior officials that making such changes would constitute “censorship of analysis and the improper administration of an intelligence programme”. He said in his complaint that he informed Mr Wolf he would not comply with the instructions, as doing so would “put the country in substantial and specific danger”.

Alexei Woltornist, a spokesman for the Department of Homeland Security, denied that “there is any truth to the merits of Mr Murphy’s claim” and said Mr Wolf “is focused on thwarting election interference from any foreign powers and attacks from any extremist group”.

Sarah Matthews, White House deputy press secretary, said Mr O’Brien “has never sought to dictate the intelligence community’s focus on threats to the integrity of our elections or on any other topic”. She said Mr O’Brien had supported a “holistic focus” on all threats to US elections.

The National Security Council did not immediately reply to a request for comment. The Office of the Director of National Intelligence declined to comment.

Adam Schiff, the Democratic chairman of the House of Representative permanent select committee on intelligence, said the complaint contained “grave and disturbing allegations” that senior administration officials had “improperly sought to politicise, manipulate, and censor intelligence in order to benefit president [DONALD]Trump politically”.

He said he had requested Mr Murphy appear before his committee on September 21st. Mark Zaid, Mr Murphy’s lawyer, said: “We will appropriately co-operate with oversight investigations, especially in a classified setting.”

The US intelligence community has warned this year that China, Russia and Iran are all seeking to influence November’s presidential election, with Kremlin-linked actors working in support of Mr Trump, and Tehran and Beijing acting against him.

“We assess that China prefers that president Trump – whom Beijing sees as unpredictable – does not win re-election,” said William Evanina, director of the National Counterintelligence and Security Center at the Office of the Director of National Intelligence, last month.

Mr Trump has derided a years-long investigation into alleged ties between his 2016 campaign and the Kremlin as a “witch hunt”. – Copyright The Financial Times Limited 2020