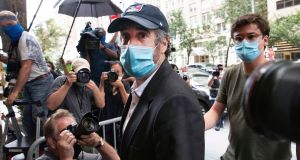 Michael Cohen returning to his apartment, in New York, after being released from prison in July. Photograph: AP

In the book Disloyal: The True Story of the Former Personal Attorney to President Donald J Trump, Michael Cohen makes the case that Mr Trump is “guilty of the same crimes” that landed the lawyer in a federal prison.

Mr Trump, despite his later protestations, approved the $130,000 (€110,000) payment to silence Ms Daniels ahead of the 2016 election, reasoning he would “have to pay” his wife Melania a far greater sum if the affair became known, Cohen writes.

He added the president later reimbursed him with “fake legal fees”.

“It never pays to settle these things, but many, many friends have advised me to pay,” Mr Trump said, according to Cohen.

“He readily admits to lying routinely but expects people to believe him now so that he can make money from book sales,” White House spokesman Brian Morgenstern said in a statement.

The Associated Press obtained an early copy of the book, which is scheduled to be released on Tuesday.

Cohen, who pleaded guilty to campaign finance violations and other crimes, including lying to Congress, calls himself the “star witness” of a hush-money conspiracy that still could culminate in charges for Mr Trump after he leaves office.

He described his new book as a “fundamental piece of evidence” of the president’s guilt.

Cohen’s allegations — his most detailed to date — are part of an unsparing and deeply personal put-down of Mr Trump. Cohen assails Mr Trump as an “organised crime don” and “master manipulator”, but allows that he saw much of himself in a man he once considered a father figure.

The memoir offers an introspective — and at times self-loathing — apology for the role Cohen played in Mr Trump’s political ascent. He urged Mr Trump for years to run for president but now laments his election “led the nation and maybe even the world to the brink of disaster”.

“I thought Trump was a visionary with a no-nonsense attitude and the charisma to attract all kinds of voters,” he writes. But the real reason he wanted Mr Trump in the White House, Cohen concedes, “was because I wanted the power that he would bring to me”.

Cohen expresses little to no remorse for his federal crimes, saying he was “railroaded” by the government and pleaded guilty after prosecutors threatened to indict his wife.

“I was in the grip of the conviction machine,” he writes. “I was the ham sandwich, and I had been indicted.”

Cohen writes that Mr Trump’s three oldest children came to his office after Mr Trump’s campaign announcement in 2015, in which he referred to people coming to the US from Mexico as rapists and murderers. Cohen says they asked him to convince their father to drop out of the race because of the damage his rhetoric would do to the Trump company.

Cohen says Mr Trump was undeterred and unconcerned by the potential harm to his businesses.

“Plus, I will never get the Hispanic vote,” Mr Trump said, according to Cohen. “Like the blacks, they’re too stupid to vote for Trump. They’re not my people.”

Cohen also sheds light on Mr Trump’s admiration of Russian President Vladimir Putin, saying he admired him most because he “had the balls to take over an entire nation and run it like it was his personal company”.

But he added Mr Trump’s campaign had been “far too chaotic and incompetent to actually conspire with the Russian government”. – AP