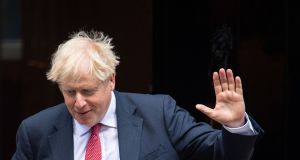 Boris Johnson: “I know it’s been tough. I’ve got to warn you it’s about to get tougher. The waters are about to get choppier. But we are going to deal with it.” Photograph: Dominic Lipinski/PA

Boris Johnson has told Conservative MPs to prepare for “choppier waters” as the Bank of England warned that the economic hit from coronavirus could be worse than expected.

The British prime minister was speaking to backbenchers after his government’s latest U-turn saw local lockdowns remain in place in Bolton and Trafford hours after they were due to be eased.

“I know it’s been tough. I’ve got to warn you it’s about to get tougher. The waters are about to get choppier. But we are going to deal with it. And when we build back better and faster and greener we will create a platform for dynamism and innovation and enterprise to flourish and create new jobs,” he said.

Chancellor of the exchequer Rishi Sunak sought to reassure his party’s MPs following days of speculation that he plans to increase taxes in this autumn’s budget. But Mr Sunak warned that the government must take action to deal with its ballooning public debt due to coronavirus.

“We will need to do some difficult things, but I promise you if we trust one another we will be able to overcome the short-term challenges. This doesn’t mean a horror show of tax rises with no end in sight. But it does mean treating the British people with respect, being honest with them about the challenges we face and showing them how we plan to correct our public finances and give our country the dynamic, low-tax economy we all want to see,” he said.

“We cannot, will not and must not surrender our position as the party of economic competence and sound finance. If we argue instead that there is no limit to what we can spend, that we can simply borrow our way out of any hole, then what is the difference between us and the Labour Party?”

Labour leader Keir Starmer accused the prime minister of presiding over a wasted summer that exposed the government’s “serial incompetence”. He said the government was set to push millions into unemployment by ending the coronavirus furlough scheme next month while other European countries have extended similar schemes into next year.

“It is the same every time: pretend the problem does not exist, brush away scrutiny, make the wrong decision, then blame somebody else. This has got to change, because the next major decision for the prime minister is on the furlough scheme. The jobs of millions of people are at risk. The longer he delays, the more they are at risk, so will he act now, finally get this decision right and commit to extend the furlough scheme for those sectors and those workers that desperately need it?” Sir Keir said.

The Bank of England has estimated that the long-term damage of coronavirus to the British economy will be equivalent to about 1.5 per cent of GDP. But deputy governor David Ramsden told MPs that it could be worse.

“Unless the adjustment is very quick and happens quite easily the chances are that the scarring effects over time may be larger than that,” he said. “For me all the risks are really that that number will be greater than 1.5 per cent.”