Wind-driven blazes in all US west-coast states destroy thousands of homes, kill at least seven

Eyewitness footage has captured eerie skies above Oregon as uncontrolled wildfires continue to rage across the US west. Video: Joel Pawloski/Shelly Hardage-Wilkinson 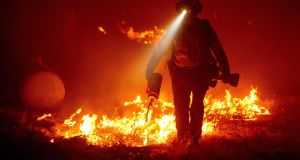 An unprecedented spate of fierce, wind-driven wildfires in all US west-coast states have destroyed thousands of homes and killed at least seven people, according to state and local authorities.

In the past 48 hours, three people died from a lightning-sparked fire in northern California while three were reported dead in Oregon and a one-year-old boy died as his family tried to escape a blaze in Washington state, local police reported.

In California, officials said some 64,000 people were under evacuation orders on Wednesday while crews battled 28 major fires across portions of the most populous US state.

About one-third of those evacuees were displaced in Butte County alone, north of Sacramento, where a wildfire has scorched more than 200,000 acres since it was ignited on August 17th.

The remains of three victims were found in two separate locations of that fire zone, according to Butte County Sheriff Kory Honea, bringing the total death toll from this summer’s devastating spate of California wildfires to at least 11.

Oregon bore the brunt of nearly 100 big wildfires ripping across western states, with about 3,000 firefighters outnumbered by more than two dozen wildfires.

The fires largely destroyed at least five towns up and down the Cascade mountain range in Oregon as some areas of cool, wet temperate forests normally spared wildfires burned after heatwaves in August and September.

East of Salem, Oregon, search-and-rescue teams began to enter destroyed communities like Detroit where they abandoned equipment and led residents on a dramatic mountain escape after military helicopters were unable to evacuate the town.

“Stay out of the Detroit and Idanha areas. We do not have the resources to rescue you if you get stuck!” said the Idanha-Detroit Rural Fire Protection District on its last Facebook post before firefighters led an evacuation caravan through mountain roads.

A 12-year-old boy was found dead with his dog inside a burned car and his grandmother was believed to be dead after flames engulfed their area near Lyons, Oregon, west of Detroit, about 50 miles south of Portland, said Marion County Sheriff’s Office in southern Oregon.

Winds of up to 80km/h sent flames racing tens of miles within hours, engulfing hundreds of homes as firefighters focused on evacuating residents rather than controlling fires.

Oregon governor Kate Brown said the state was facing its greatest ever loss in lives from wildfires with the communities of Blue River and Vida in Lane County and Phoenix and Talent in southern Oregon largely destroyed.

Evacuations were taking place across the whole of Oregon, an area around the size of the United Kingdom, as fires burned in every region.

In Marion County most of the city of Medford, with 82,000, was told to evacuate or prepare to evacuate as fires burned around the city.