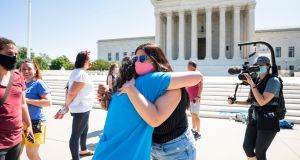 Anti-abortion protesters embrace each other outside the US supreme court of the United States after it struck down a controversial Louisiana state abortion law in Washington, DC. Photograph: Jim Lo Scalzo/EPA

The US supreme court has struck down a court ruling in Louisiana which would have limited the number of abortion providers in the state to a single clinic, in a landmark victory for abortion rights activists.

The ruling had been closely watched as it was the first judgment by the supreme court on an abortion case since the appointment of President Donald Trump’s two nominees to the court – justices Neil Gorsuch and Brett Kavanaugh.

Chief justice John Roberts sided with the four liberal justices on the court to strike down the law – the latest in a series of surprise rulings by the course that have pleased liberals.

But Mr Roberts said that he had voted because of his respect for legal precedents – prompting speculation that he could reach a different conclusion in other abortion cases. Several abortion cases are currently in the federal appeals court system, and could be taken up by the supreme court.

Monday’s ruling concerned a 2014 law which required doctors performing abortions in Louisiana to have admitting privileges to a nearby hospital, a rule that would in practice have limited the ability of clinics to provide abortion services.

Justice Stephen Breyer, who wrote the legal opinion, said that such a law would have imposed burdens on access to abortion, but would not protect women’s health as claimed.

In a separate decision on Monday, however, the court declined to consider a legal challenge to new federal rules on the death penalty, which may allow the federal government to resume executions for the first time since 2003.

Separately, the White House was coming under increasing pressure over widespread reports that Russia offered cash to the Taliban to kill US and British military personnel in Afghanistan.

Ms McEnany reiterated claims by Mr Trump on Sunday that he had not been told of the intelligence, as reported by the New York Times.

US media organisations reported that at least one, and possibly more, US personnel were killed because of the bounties offered by Russia to the Taliban.

But Mr Trump asserted that the intelligence was not credible.

“Intel just reported to me that they did not find this info credible, and therefore did not report it to me or vice president Pence,” he tweeted on Sunday amid accusations that the White House had failed to act on the news.

White House officials briefed a small group of lawmakers on Capitol Hill on the matter on Monday after House speaker Nancy Pelosi demanded information on the reports.

“Congress needs to know what the intelligence community knows about this significant threat to American troops and our allies and what options are available to hold Russia accountable,” she wrote in a letter to the director of national intelligence and the head of the CIA.

1 World, look away now – these are dark days for the United States
2 Health officials ‘very concerned’ about foreign travel, says Donnelly
3 Michelle O’Neill will not step aside ‘under any circumstances’ despite calls from other parties after Storey funeral
4 ‘Grossly irresponsible’- Waterford mayor condemns house party of 60 people
5 Bobby Storey: The IRA's planner and enforcer who stayed in the shadows
Real news has value SUBSCRIBE