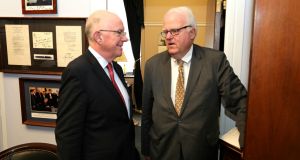 Minister for Foreign Affairs Charlie Flanagan (left), on a visit to Washington, has welcomed plans by Republican Congressman Jim Sensenbrenner (right) of Wisconsin to table legislation for E3 visas for “a limited period of time for Irish people”. Photograph: Marty Katz

A Republican congressman intends to introduce a Bill that, if passed, would allow thousands of Irish to apply for new “E3” visas to live and work in the US, Minister for Foreign Affairs Charlie Flanagan said.

Mr Flanagan, on a visit to Washington, welcomed plans by Republican Congressman Jim Sensenbrenner of Wisconsin to table the legislation for the visas for “a limited period of time for Irish people”.

Mr Sensenbrenner, a former chairman of the influential House judiciary committee, is expected to present his proposals in the Senate first, where he will seek up to 10,500 working E3 visas for the Irish.

Speaking after meeting the Republican, Mr Flanagan told The Irish Times that while he didn’t expect progress in Congress on legislation to help the so-called “undocumented” Irish in the US, he said Mr Sensenbrenner’s Bill would be important for Irish-US relations.

The Irish Government would be seeking the support of both Republicans and Democrats to support the passage of the Bill, he said.

“I believe that it is important that there is an opportunity for debate and discussion,” said Mr Flanagan on the proposed legislation.

“I acknowledged that it is early days and that the route is something of a long road. Nevertheless, it is an important and welcome initiative and we will be seeking support from both sides of the aisle in order to ensure its debate and ultimate passage.”

Mr Sensenbrenner said: “The United States was built on the hard work and determination of immigrants -many from Ireland - and the fruits of their labour has enabled this country to grow and prosper.

“I believe in the value and opportunity that comes with legal immigration, and I’m pleased to work on legislation that would make the process more efficient for one of our oldest allies, as well as add to the great legacy of cultural diversity celebrated in America.”

Immigration reform, a highly contentious topic in US politics and particularly amid the frenzied 2016 Republican presidential nomination race, has stalled in Congress after the Republican-led House of Representatives refused to take up a cross-party Bill passed by the Senate two years ago.

That wide-ranging Bill included a provision for 10,000 Irish “E3” visas a year, similar to an arrangement on offer to Australians.

The death of the Bill drafted by the so-called Gang of Eight senators spelt the end of the Irish E3 proposal.

Mr Sensenbrenner’s Bill would, however, resurrect the measure in a standalone piece of legislation.

On Northern Ireland, Mr Flanagan said the political situation was at a “most critical juncture”, adding he had briefed senior congressmen and spoken on the issue by telephone with former US senator Gary Hart, the US secretary of state’s envoy for Northern Ireland.

The Minister urged US politicians to continue to stay involved in the North, saying he believed there were issues that could not be resolved “around the table in Stormont”.

He said that it was important that Senator Hart made a visit to Belfast in the next few weeks.

There “may well be a role for the Americans” in any group to monitor the existence of paramilitaries that is set up in an effort to break the political impasse in the North, he added.