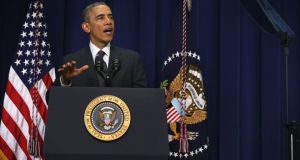 US president Barack Obama is unlikely to heed external calls for CIA torturers to be held to account and prosecuted. Photograph: Alex Wong/Getty Images

The firestorm sparked by the US Senate report into brutal CIA torture of al-Qaeda suspects during the George W Bush era and claims that the agency lied about the effectiveness of the interrogation programme has pulled President Barack Obama in opposite directions.

While Mr Obama praised CIA “professionals” as “patriots” who have “worked tirelessly to devastate al-Qaeda’s core, deliver justice to Osama bin Laden, disrupt terrorist operations and thwart terrorists attacks”, he said some CIA actions were “contrary to our values” and “did significant damage to America’s standing in the world”.

The president’s comments are consistent with his long-held view that the CIA’s rendition, detention and interrogation programme involved torture.

“We tortured some folks,” he said explicitly at a news conference in August.

The Senate report set out the graphic nature of that torture, including the slamming of CIA-held detainees into walls, holding prisoners with broken legs and feet in stress-inducing positions and keeping detainees awake for up to 180 hours.

The main finding of the Democratic-led Senate study - that the CIA’s brutal techniques did not produce intelligence to stop attacks that would have killed Americans - remains in dispute.

Senator Dianne Feinstein, the Democratic chairwoman of the Senate intelligence committee which carried out the study, said the programme did not yield information about a “ticking time-bomb scenario”, contrary to the CIA’s claims justifying the techniques.

The CIA maintains that the 2002-2007 programme produced valuable information that was critical to its understanding of al-Qaeda, and continued to inform US counterterrorism efforts.

Locked in the middle, the president has tried to consign the CIA’s activities to the past and to move on.

He has refused to take the side of fellow Democrats or, in Mr Brennan, a former long-serving aide and career CIA officer who plays a vital role in the president’s combat machine, overseeing lethal drone strikes and targeted military missions.

Mr Brennan explained his own position on the interrogations programme by telling senators at his confirmation hearing as CIA director last year that he raised “personal objections” at the time but that he “did not try to stop [it]” because it was “being done in a different part of the agency under the authority of others, and it was something that was directed by the administration at the time”.

Senior Obama administration officials have made clear that, despite his objections to past CIA practices, the president will not engage in the debate about the efficacy of the programme.

He is unlikely to heed external calls for CIA torturers to be held to account and prosecuted.

Ben Emmerson, the UN’s special rapporteur on counterterrorism and human rights, said CIA officials who committed acts of torture must be prosecuted.

International law prohibits immunity being granted to public officials who permit torture, so the US government is “legally obliged to bring those responsible to justice”, he said.

The US Justice Department said on Tuesday it would not reopen a criminal investigation into CIA activities after concluding in previous inquiries that it would not prosecute individuals who acted within the legal guidance provided by its own Office of Legal Counsel.

Elizabeth Goitein, a co-director of the Liberty and National Security Programme at New York University’s Brennan Center for Justice, said the Senate report may lead to administrative sanctions affecting the careers of CIA officials and, more generally, the closing of loopholes to prevent torture from happening again - but the Justice Department has no appetite for follow-up prosecutions.

“The Justice Department was complicit in this - it was issuing memos that were blessing at least a subset of these actions,” she said.

“You are asking the executive branch to police and prosecute itself, and it is not good at doing that. It is the responsibility of the Justice Department to prosecute rogue individuals, but it is unlikely to prosecute people at a senior level who followed administration policy.”

That is not to say that the report could not lead to criminal actions outside the US, similar to a 2009 case in which an Italian court convicted 22 CIA officers and an Air Force officer, in absentia, for kidnapping an Egyptian cleric in Milan who claimed he was tortured.

This was the first trial anywhere in the world involving the CIA’s rendition and torture programme. It may not be the last.