US police officer convicted of murder over shooting unarmed woman

July 19th, 2017: Family and friends hold a vigil for Justine Damond, an Australian national shot and killed by a US police officer in Minneapolis, while the Australian government demand answers over the incident. Video: Reuters 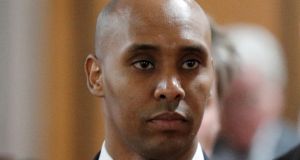 Mohamed Noor (above) was convicted of third-degree murder as well as manslaughter in the July 2017 death of Justine Ruszczyk Damond, a 40-year-old dual citizen of the US and Australia. File photograph: Adam Bettcher/Reuters

A Minneapolis police officer has been convicted of murder over the fatal shooting of an unarmed woman who approached his squad car minutes after calling 911 to report a possible rape behind her home.

Mohamed Noor was convicted of third-degree murder as well as manslaughter in the July 2017 death of Justine Ruszczyk Damond, a 40-year-old dual citizen of the US and Australia. The case received wide coverage around the world.

He was not convicted of the most serious charge of intentional second-degree murder.

Jurors deliberated for about five hours on Monday and six on Tuesday before reaching a decision.

Noor and his partner were rolling down the street behind Ms Damond’s home and checking out the 911 call just before the shooting.

Noor testified that a loud bang on the squad car scared his partner and that he saw a woman raising her arm appear at his partner’s window.

He said he fired to protect his partner’s life.

Prosecutors attacked Noor for shooting without seeing a weapon or Ms Damond’s hands.

They also questioned whether the loud bang was real.

Neither Noor nor his partner, Matthew Harrity, mentioned it to investigators at the scene, with Mr Harrity first mentioning it three days later in an interview with state investigators.

Noor refused to talk to investigators.

The death of Ms Damond, a life coach who was engaged to be married a month after the shooting, sparked outrage in both the US and Australia.

It also cost Minneapolis’ police chief her job and contributed to the electoral defeat of the city’s mayor a few months later.

Neither officer had a body camera running when Ms Damond was shot, something Mr Harrity blamed on what he called a vague policy that did not require it.

Both men switched on their cameras in time to capture the aftermath, which included their attempts to save Ms Damond with CPR.

But Noor’s bullet hit her in a key abdominal artery, and a medical examiner testified she lost so much blood so quickly that even faster medical care might not have saved her. – Associated Press