Early voting a key battleground in US presidential election 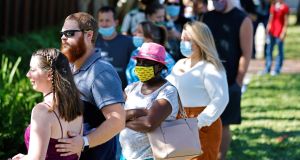 Early voters queue to cast their ballots in the US presidential election at Temple Terrace public library in Tampa, Florida, on Saturday. Photograph: Peter Foley/EPA

It’s midday in Portland, Oregon, and polling station queues are nowhere to be seen. Here, in the first state in the US to introduce statewide postal voting back in 2000, more than 60 per cent of registered voters have already cast their ballots in next Tuesday’s elections.

As polling day draws closer, though, the deadline to return ballots by mail has passed, and now voters need to use one of the dozens of drop boxes around the city.

Some had always planned to use that option. “I want my vote to get in,” says Helena Thompson, ballot in hand at an east side drop box, adding that the vote-by-mail route “seemed iffy”. Thompson says having that ballot counted was paramount, especially in this election. “It matters more now than ever.”

Concerns about having one’s vote counted are echoing across the country, while President Donald Trump foments suspicion about the integrity of the election and spreads false rumours about “discrepancies” with postal ballots. His campaign has also attempted to litigate the voting process in some states, including the use of drop boxes themselves.

“I cannot come up with a good reason for anyone to oppose a drop box other than to limit access,” says Prof Paul Gronke, founder and director of the Early Voting Information Center at Oregon’s Reed College. In a pandemic, he points out, drop boxes make more sense than ever. “It’s a no-touch, safe way to return your ballot.”

Drop boxes are just one example. As states grapple with the pandemic and look for new accommodations to ensure safe voting and representative counts, court rulings are following thick and fast. A supreme court decision last week ruled against extending Wisconsin’s deadline for counting mailed ballots up to six days after the election, despite fears that the pandemic could delay postal delivery and ballot processing. But in an all-important swing state that’s been ravaged by Covid-19, voters are also showing up in record numbers to vote early in person.

One Wisconsin voter who declined to give his name said he went to vote at the polling site because, “I was afraid the mail voting system was corrupted.” The process involved sitting at a computer to print out his ballot – he wore gloves, he told me, though they weren’t required – and then sealing it in an envelope for deposit.

Because masks were required at all times, he had to use what he described as “an artificial tongue” to seal the ballot envelope – “like a bottle of glue with a spongy sphere on the top”. It wasn’t an anxiety-free process, but at least he is confident his vote will count. Because of the supreme court ruling, any votes that arrive after November 3rd – even if mailed before that date – will not.

Gronke traces this kind of judicial involvement in the electoral process back to the Bush versus Gore presidential election in 2000. The supreme court’s decision to stop a Florida recount that year ultimately gave the victory to Bush, a move many saw as the highest court putting its thumb on the political scale.

“Since 2000 there’s been this focused effort to use stories of malfeasance or problems, and create this narrative of voter fraud,” says Gronke. “Some would say that the judicial process has been weaponised in a way to try to actively suppress the votes.”

In his opinion on the Wisconsin ruling, supreme court justice Brett Kavanaugh alarmed voter rights advocates by citing states’ desire to announce the “results of the election on election night, or as soon as possible thereafter”.

His statements appeared in step with sentiments expressed by Trump himself, who has repeatedly insisted the result must be known on election day. With Republicans deemed more likely to vote on the day and Democrats to cast their ballots by mail, which can take longer to tally, an early call would likely favour the incumbent.

“To hear Brett Kavanaugh say that, a supreme court justice, was one of those moments that was just such a shocker because, no, that’s not how it works,” says Gronke.

The country’s deepening divisions, it seems, extend even to the electoral process itself, which has become largely a partisan issue. “There’s this sense that more people voting is going to be harmful for Republicans because their party right now is based on a narrowing segment of the public – older, white, less often college educated, more male than female,” says Gronke. “So they have this political strategy that includes suppressing the vote.”

And though some court decisions are still pending – a federal judge in Texas is on Monday hearing a case brought by a Republican state representative challenging the validity of more than 100,000 votes already cast at drive-through polling places in the Democrat-leaning Harris county – Gronke has one piece of advice for Americans wondering when or how to get their ballots in: “Vote right away,” he says bluntly.

On the Upper East Side of Manhattan, Nandita Shenoy spent more than six hours in line last Tuesday trying to accomplish just that. “This is the first presidential election that they’re doing early voting,” she says, New York having introduced it in 2018. “So I guess that created a bit of an issue, because there are fewer early voting sites than regular voting sites.”

She arrived with an older neighbour at 12.15pm, and the queue was already twice around the block. It was 6.30 before she got to cast her ballot. “I did mail-in voting for the primary and it took six weeks to find out who won here, so I just wanted to have it counted sooner rather than later.”

As Trump pushes for a quick result that experts say may not be possible for states dealing with a pandemic and straining systems, casting your vote is only half the battle. “It’s less ‘It’s hard to vote’,” says Gronke, “as it is ‘You can vote, but then your ballot has to be counted’.”