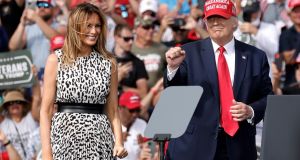 US president Donald Trump with his wife Melania at a rally in Tampa, Florida. Photograph: Peter Foley/EPA

Focus will turn to the “Rust-Belt” states of the upper-midwest on Friday, when the two US presidential candidates hold a series of campaign events in key battleground states.

President Donald Trump is due to hold two rallies in Michigan, a state he won by just over 10,000 votes in 2016, before travelling on to Wisconsin. He will finish the day with a campaign event in Minnesota, a state which Republicans have not won since Richard Nixon was elected in 1972, but which the Trump campaign is hoping to flip.

Joe Biden’s campaign also announced on Thursday that the former vice-president will visit Minnesota on Friday – perhaps suggesting concern on the Democratic side that the state could be in play. The surprise visit comes a day before he is scheduled to campaign in Michigan with former president Barack Obama.

Speaking at a campaign rally in Tampa, Florida, Mr Trump touted Thursday’s economic figures which showed a record improvement in the economy in the third quarter. Gross domestic product (GDP) increased by 7.4 per cent – 33 per cent on an annualised basis – between July and September, following a dramatic contraction due to the coronavirus pandemic in the previous quarter.

Mr Trump also referenced the recent volatility on Wall Street. “Biden is holding back the stock market . . . the market’s going down because if he gets in you’re going to have one of the worst depressions we have ever had,” he said to cheers.

“I’m running against the worst candidate in the history of presidential politics,” he said of his Democratic opponent. “He shouldn’t be here,” he added, claiming that if Bernie Sanders had won the nomination, Democrats would have a more energised base.

In his first public comments on the revelation that the anonymous source behind a controversial article in the New York Times in 2018 was former department of homeland security chief of staff Miles Taylor, Mr Trump said that he had “nothing to do with the White House”, describing Mr Taylor as “scum” and a “lowlife”.

In a surprise addition to the schedule, Mr Trump’s wife Melania, who has only made one previous appearance on the campaign trail, introduced her husband on stage.

“President Trump chooses to move this country forward. This country deserves a president with proven results, not empty words or promises,” she said to cheers. “I ask you to join us in continuing to put America first. Together we will overcome his pandemic, and continue building the brightest future for generations to come.”

Meanwhile, Mr Biden urged Democratic supporters to use their vote as he also visited the crucial swing stage on Thursday. “Five days left, folks, millions of Americans are already voting, millions more will vote by the end of this,” he told supporters in Broward County just north of Miami.

“I believe when you use your power – the power of the vote – we will change the course of this country for generations to come, both at home and abroad right here in Florida – with all of you.” Mr Biden was scheduled to deliver remarks on Tampa later in the evening.

With 29 electoral votes, Florida is a crucial state for the presidential candidates as they seek to secure the 270 electoral college votes needed to win. Polls are tight in the state, though a Monmouth University poll released on Thursday afternoon showed Mr Biden leading Mr Trump by 50 per cent to 45 per cent among registered voters. Early voting in the state has been strong, with three-quarters of the total vote cast in 2016 already received.

Meanwhile, some staff on the campaign of Mr Biden’s running mate Kamala Harris who have been working closely with her husband Doug Emhoff have been forced to quarantine after a flight crew member tested positive for coronavirus.

But the Biden campaign said that Mr Emhoff, who has been actively campaigning for his wife in recent weeks, would continue with his planned engagements.

Ms Harris is due to visit Texas on Friday amid hopes on the Democratic side that the Republican-leaning state could vote for Mr Biden.