Bundestag opposition warns of ‘crisis of trust’ in government with bars, restaurants to close 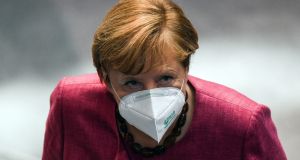 German chancellor Angela Merkel: ‘We are in a dramatic situation that affects us all, without exception.’ Photograph: Filip Singer/EPA

Chancellor Angela Merkel has told Germans to prepare for a “hard winter” as the country enters a partial lockdown from Monday.

In a sober speech to the Bundestag in Berlin, the German leader dispensed a bitter medicine to counter the Covid-19 pandemic, but countered far-right heckling with a shot of optimism for the future.

“The winter will be hard but it will end,” said Dr Merkel, hours after agreeing with state leaders to close restaurants, bars and gyms for a month from Monday. “We are in a dramatic situation that affects us all, without exception.”

After Germany came through the first wave better than its European neighbours, Dr Merkel warned that local health authorities are already overburdened by the Covid-19 spread in the second wave and can only trace one quarter of new infections – now at 16,000 per day.

The controversial lockdown measures agreed on Wednesday, she said, were “appropriate, necessary and proportionate” .

Germany’s finance and economy ministers have presented a €10 billion fund for businesses affected by the new restrictions.

“We have to weigh up the price for which people are dying,” he said.

The sales pitch for Germany’s second lockdown has proven more difficult than the first in spring, with all opposition parties attacking the grand coalition government on Thursday for only seeking parliamentary approval for measures after they were agreed.

Last week Bundestag president Wolfgang Schäuble urged MPs to lean on the government to do more to explain – and justify – infection reduction measures.

Green Party co-leader Katrin Göring-Eckardt suggested public disquiet over the latest lockdown was an indication of a “crisis of trust” in the federal government.

“We have no other option but to go into this second lockdown,” she said. “But it’s not good enough that, one day after measures are agreed by state leaders, we discuss them here. That will not lead to the kind of acceptance we need for people to work with us.”

Germany’s second lockdown – following similar measures across Europe – has generated considerable pushback, not just from sectors of the economy affected, but also from leading medical professionals.

“We have to prepare for a marathon,” said Prof Hendrik Streeck, a leading virologist from the University of Bonn, proposing a shift away from lockdown measures to a new plan to protect vulnerable groups.

“We have to find new ways to allow life to happen without endangering other people.”

He was backed by Dr Andreas Gassen, head of the doctors’ representative association, who called lockdowns “neither constructive nor workable”.

Closing theatres, museums and gyms for the second time this year was, Dr Gassen said, the equivalent of putting the country into an “artificial coma” and hoping for the best.

Instead he called on German leaders to find a proactive way to encourage people to follow hygiene and distancing rules “without painting apocalyptic scenarios”.