While Labour has called for a national ‘circuit-break’ , many Conservatives want to stick with a localised three-tier strategy 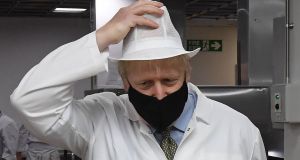 British prime minister Boris Johnson visiting a hospital in Reading, west London. He is weighing up whether to scrap his three-tiered local lockdown approach. Photograph: Jeremy Selwyn/pool/AFP via Getty Images

Downing Street came under pressure on Thursday to introduce a more stringent national lockdown across England, as growing scientific evidence indicated that infections are now spreading at an alarming rate.

One infection study released by Imperial College London concluded that the pace of the epidemic was accelerating, with almost 100,000 people catching coronavirus every day in England and the R number at 1.56 – meaning that infections are doubling every nine days.

However, another report, published later in the day by the MRC Biostatistics Unit at Cambridge university, underlined the dilemma facing Boris Johnson as he weighs up whether to scrap his three-tiered, local lockdown approach.

Using different methods the Cambridge study gave more reassuring results. It estimated 55,600 new infections a day, and found a marked slowing in the growth rate. R, the average number of people to whom someone infected passes on the virus, has fallen close to 1 in London, the MRC team found.

Experts urged politicians and the public not to focus on apparent contradictions between studies.

“The scientists who do this work are extremely careful to spell out uncertainties in their estimates, and it is crucial for the public to know about these uncertainties and understand what they mean,” said James Naismith, biology professor at Oxford university.

“Our elected representatives have to make decisions with this imperfect data. If the virus is growing rapidly then waiting until we are sure will result in significant additional deaths and illness resulting from the virus that could have been saved.”

While the opposition Labour party has called for a national “circuit-break” lockdown lasting two or three weeks, which would close all pubs and restaurants while keeping schools open, many within the Conservative Party want to stick with the localised strategy.

One government aide said the coming weeks would see more and more regions plunged into higher tiers until “virtually everywhere” is likely to be on Tier 3 – the most stringent of the package of measures – by December.

On Thursday the government announced that West Yorkshire would move into Tier 3 from Monday, while other parts of Yorkshire, the Midlands, east and southeast of England will move into Tier 2 from Saturday.

The aide said ministers wanted to cling to the tier system for as long as possible to avoid the political embarrassment by accepting Labour’s call for a national lockdown.

Another government figure said that the UK was “three or four weeks” behind Belgium and France in terms of both the trajectory of the virus and the policy response.

“The question, therefore, is do we act now to stop it becoming as bad as Belgium and France, or not?” he said. “The politicians haven’t decided yet.”

Speaking on the BBC, housing secretary Robert Jenrick argued that varying infection rates across the country would render a “one-size-fits-all” strategy inappropriate.“I think it is right that we try everything in our power to try to avoid a blanket national lockdown.”

This sentiment has been shared by his colleagues within the party as concerns grow surrounding the impact of the pandemic on local businesses as well as other long-term health conditions.

“Given that the tiered system can work if done properly I think the government will want to stick with it,” said Neil O’Brien, Conservative MP for Harborough. “It can be made to work.”

David Heymann, professor of infectious disease epidemiology at London school of hygiene and tropical medicine, agreed. “We need precision lockdowns, with testing and tracing controlled locally, rather than a shutdown of the whole economy. These will only work if public health workers are empowered and properly funded at the local level.”

Government figures show that the weekly case rate in England now stands at 201 people per 100,000 between October 15th and October 21st. However, there remains large variation between areas, with northeast Lincolnshire recording a weekly case rate of 320 per 100,000.

However, Mr Johnson’s ability to tighten restrictions is limited by opposition within his own party to the measures already in place. Earlier this week 50 Conservative MPs – dubbed the Northern Research Group – called for the prime minister to outline a “clear road map” out of lockdown.

The group, headed by the former northern powerhouse minister Jake Berry, argued that the north of England had seen “unparalleled” levels of disruption throughout the pandemic. It added that the Tier 3 restrictions threatened to increase the disparity between the north and the south of the country.

This sentiment has been echoed by MPs outside of the group, including Steve Baker who is part of a libertarian wing of the party which has openly questioned the economic viability of repeated lockdowns.

“Repeated lockdowns will make business increasingly impossible. The only way we change course on the economy is to change the coronavirus strategy, opening up the economy with practical safeguards to live with the virus, as the chief scientist has said we must,” said Mr Baker.

With neighbouring France and Germany set to enter into varying degrees of nationwide lockdown, some among the scientific community have voiced concerns that the current tier system within England is ineffective, rendering a national lockdown inevitable.

Lawrence Young, professor of molecular oncology at Warwick University, said: “The only thing that works is to have a proper lockdown.

“I know that’s terrible economically. It’s a blunt instrument, but it’s one we know has worked, not only in [Australia] but other parts of the world. We need a short sharp lockdown to get testing and tracing working.”

Simon Clarke, a microbiologist at the University of Reading, said: “As the coronavirus is spread around more and more, localised restrictions may need to give way to lockdown-style scenarios either at a regional or national level.

“The peak of the first wave was successfully reduced through a lockdown, and it may require similar intervention again if other measures don’t work.”

Earlier on Thursday, home secretary Priti Patel admitted that while the government was committed to its existing plans, it was impossible to rule any option out.

She told Sky News: “Well, I think at this stage of course we can rule nothing out because we are a government that is focused on making sure that we stop the spread of this virus, and also we protect public health.

“We have been using, we are using and will continue to use, every single means available to us to do exactly that”. – Copyright The Financial Times Limited 2020