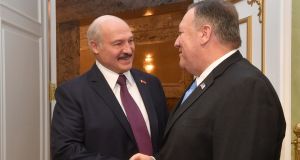 The US has offered to supply Belarus with all the oil it needs and end its energy dependence on Moscow, amid rising concern in Minsk that Russia’s push for deeper integration may pose a threat to Belarusian sovereignty.

Mike Pompeo made the proposal as he became the first US secretary of state to visit Belarus in 26 years, during a tour of ex-Soviet states where Washington faces strong competition from Russian and Chinese interests for influence.

In Minsk he met Alexander Lukashenko, authoritarian president of Belarus since 1994, who often played Moscow and the West off against each other before siding with Russia rather than bowing to pressure for democratic reforms.

His relations with the Kremlin have come under strain in recent months however, as Russia ramped up pressure on Belarus to deepen their loose economic union and refused to extend a deal on cheap oil supplies to Minsk.

“The United States wants to help Belarus build its own sovereign country,” Mr Pompeo said after talks with Mr Lukashenko.

“Our energy producers stand ready to deliver 100 per cent of the oil you need at competitive prices. We’re the biggest energy producer in the world, and all you have to do is call us.”

He insisted that the US was not pressing Belarus to “choose” the West over Russia, after arriving in Minsk from Kiev, where a pro-western revolution in 2014 prompted Moscow to seize Crimea and foment a separatist war in eastern Ukraine.

“We understand you’re a neighbour, there’s a long history with Russia, it’s not about picking between the two,” Mr Pompeo said.

The US and Belarus are planning to send ambassadors to each other’s capitals for the first time in 12 years, and Washington and Brussels have eased many of the sanctions they imposed on Belarus for rights abuses that prompted then US secretary of state Condoleezza Rice to call it “Europe’s last dictatorship” in 2005.

Mr Lukashenko, a burly former collective farm boss, told Mr Pompeo that it was “very good that you risked coming to Minsk” and joked that “what makes our dictatorship different is that everyone rests on Saturday and Sunday but the president works”.

He is under pressure from the Kremlin to strengthen a “union state” that until now has lacked substance, and which could allow Russian president Vladimir Putin to continue to rule in a new role when his term ends in 2024.

“We are sovereign and independent . . . and we cannot be part of some other country. I can’t betray Belarus and dissolve it, even into brotherly Russia,” Mr Lukashenko said last month.

From Minsk Mr Pompeo flew to Kazakhstan, where he called for “an immediate end” to China’s “repression” of ethnic Uighurs and Kazakhs in the neighbouring Xinjiang region.

He also urged Kazakh firms to do more business with US companies, amid a surge of Chinese investment in the energy-rich country and across Central Asia.

Mr Pompeo then travelled to Uzbekistan, where on Monday he will meet its foreign minister and his counterparts from Kazakhstan, Kyrgyzstan, Tajikistan and Turkmenistan.