Even if Joe Biden wins, Democrats should be chastened

Trump’s vote has held up well, and Democrats’ hopes of retaking the Senate are fading

Democratic candidate Joe Biden tells supporters in his home state of Delaware that "It’s clear that we’re winning enough states" as counting continues in the US presidential election. Video: Reuters 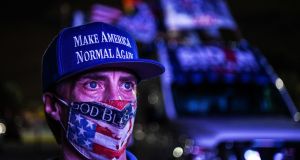 After four years of head-spinning drama and churning news cycles, a presidential election in the time of Donald Trump was never going to conclude quietly.

Instead the election to decide the next president of the United States has come down to the wire. As the counting continued for a second day, the US presidential election remained too close to call, though a wave of late counts appeared to be tipping the election in favour of Joe Biden.

The story of the past 36 hours began – as expected – in Florida. The battleground state has always been closely fought. Very early in the evening it became clear that Donald Trump was leading.

Although Biden chalked up early wins in western parts of Florida shortly after polls closed on Tuesday night, Trump overperformed in the state’s largest county, Miami-Dade. The Republican candidate drove up support among Hispanic voters – who represent 70 per cent of the county – proving Democrats’ niggling doubts about Biden’s Latino support. Similarly, the much-talked-about senior vote held up for Trump. In Sumter County – home of The Villages retirement community – Trump won 67.8 per cent as final votes were counted, compared with 68.8 per cent in 2016.

Though Florida has unique demographic features, the pattern that emerged in the state was replicated in other states throughout election night. North Carolina and Ohio all showed signs that Biden was ahead as the first groups of votes came in. But as more ballots were counted – and a higher proportion of those cast on election day were tabulated – each state gradually moved into Trump’s column and Democrats’ hope of a blue wave across the south faltered.

Thankfully for Biden, that pattern was reversed as the midwestern states of Michigan, Wisconsin and Pennsylvania came into focus. Unlike the southern states, officials counted election day votes first, with the early numbers favouring Trump. At time of writing, postal votes – which are used disproportionately by Democrats – looked set to deliver victory for Biden in much-needed midwest states.

Ultimately, despite widespread speculation about Democrats remaking the election map, this election came down to where the 2016 election ended – the rust-belt states of the midwest. All eyes remain on Michigan, Wisconsin and Pennsylvania – though a final count in Pennsylvania is not expected before Friday, when election officials will stop accepting absentee ballots that arrived late but were posted before election day.

Although we may only get a fuller picture by the end of the week – Nevada, for example, will resume counting ballots on Thursday – it is now highly likely that President Trump will contest the election result, and a lengthy legal process may ensue. This could take weeks, first beginning in lower courts, before ultimately making it to the US supreme court, which intervened in the disputed 2000 race between Al Gore and George W Bush.

Even if Biden ultimately wins this election, which appears increasingly likely as the final votes are counted, Democrats should be chastened by this performance.

The ghosts of the 2018 midterm elections have resurfaced. During the election cycle two years ago, Democratic candidates Beto O’Rourke, Stacey Abrams and Andrew Gillum garnered national attention and money as they threatened to turn three Republican-leaning states – Texas, Georgia and Florida respectively – blue. But while all three candidates performed strongly, it was not enough to flip the states. Two years later, history has repeated. Despite speculation around a Democratic wave in Georgia and Texas, reflecting the changing demographics in these states, the southern states appear to have remained out of reach for Democrats. However Biden’s win in Arizona – a traditionally Republican state – is significant.

Equally worrying for Democrats, however, is that if Biden is elected president he will be leading a highly divided country. The animosity towards Trump that many Democrats presumed existed throughout the country simply did not manifest itself. This election has shown that the 45th president remains highly popular – three million more Americans voted for him compared with 2016. In a further constraint to a Biden presidency, the Democratic president-in-waiting may govern with a Republican-controlled Senate. Democratic hopes of regaining control of the Senate faded yesterday as Republicans successfully defended seats from South Carolina to Iowa.

One of the other casualties of this election may well be political polling firms.

Yet again, polls were revealed to be out of kilter with what was really happening in the US. To take one example, Wisconsin was extremely tight and ultimately trended towards Biden. But as recently as Sunday a New York Times-Siena College poll had Biden 11 points ahead, while a Washington Post-ABC poll a week ago had Biden leading by 17 points.

Donald Trump was given a one in 10 chance of winning the election by polling-analysis website FiveThirtyEight. The website has been on the defensive since 2016, when it argued that the interpretation of its analysis and polls – not the polls themselves – explained the surprise defeat of Hillary Clinton. Four years later the defence is wearing thin. The media also have questions to answer. During this campaign cycle, there was little scrutiny of how polls were conducted, even though much election analysis derived from polling data. More philosophical questions remain about the role played by polls in the democratic process. What exactly is their function and who do they serve? At a time of heightened public scepticism about mainstream media, polling mishaps are fuelling suspicion about a Washington-based political culture that often blithely makes assumptions about voters without leaving the “beltway bubble” of Washington.

As the next phase in the Trump drama plays out as the election result is decided, the US is again facing a period of soul-searching as another election raises the curtain on an intensely divided country.