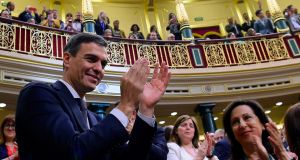 A week ago, after Pedro Sánchez announced he was presenting a motion of no-confidence against Spanish prime minister Mariano Rajoy, few believed it would succeed.

The parliamentary arithmetic looked too demanding, with the support of virtually all of the country’s nationalist parties needed, along with that of Podemos. Moreover, Rajoy had just managed, against the odds, to push through the 2018 budget.

But in his short frontline political career Sánchez has earned a reputation for doggedness. In 2016, having lost two general elections, he was forced to resign as Socialist leader after his refusal to help Rajoy’s investiture unleashed a bloody civil war in the party. Months later, he defied his critics to win the leadership back.

Ousting Rajoy and becoming the seventh prime minister of the democratic era is his biggest achievement yet. But it could pale in comparison to the challenge he now faces.

The Socialists have only 84 seats in congress – less than a quarter of the total – making Sánchez’s government the weakest of the modern era.

It will also be subject to an extraordinary range of pressures from the parties that lent him their vote yesterday.

Sánchez’s pledge to maintain the budget passed last week – a promise he had to make in order to secure the key support of the Basque Nationalist Party (PNV) – is likely to be only the first of many such commitments the fragile majority will force on him.

But beyond the economy, his most pressing priority will be Catalonia. He has been a spectator for much of the recent territorial crisis, shackled by the more unionist voices in his own party who ensured he was loyal to Rajoy’s use of direct rule in Catalonia last October. That pressure not to be seen as weak on the issue also saw Sánchez label new Catalan president Quim Torra a “racist” and “supremacist” only a few days ago.

Yet he is now at least partly in debt to Torra’s Catalan Democratic Party (PDeCat), whose eight seats helped him become prime minister on Friday. Sánchez has said he will seek to open a dialogue with the Catalan government – a vague proposal, but a potentially significant one, especially given that direct rule is now due to be lifted, a development that could ease some of the tensions between Madrid and Barcelona.

But hanging over the Sánchez administration will be the pressure to call a general election, given that he has become prime minister without winning one. On the right, Ciudadanos has a clear lead in the polls, thanks mainly to its uncompromising stance on Catalonia. Sánchez is now in a race against time to prove his worth as Spanish leader before he has to call an election, which may end up being sooner than he would like.