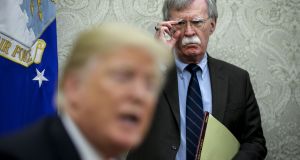 The room where it happened: John Bolton with Donald Trump in the Oval Office. Photograph: Oliver Contreras/Washington Post via Getty

Book Title:
The Room Where It Happened: A White House Memoir

Pity, for just an infinitesimal moment, John Bolton. There he was last January, commanding an enormous share of the American public’s attention with news of a forthcoming book that reportedly included an “explosive account” of the Ukraine scandal at the centre of President Donald Trump’s impeachment trial.

At the time the US national-security council was conducting a routine review of the manuscript for classified information. The book was set to publish in mid-March, but the date kept getting pushed back, and eventually there was chatter about whether it would get published at all. (On June 16th the Trump administration filed a lawsuit to try to delay publication again or otherwise prevent Bolton from profiting from any book sales.)

In the past few months even the memory of the impeachment proceedings has been largely superseded by the coronavirus pandemic and Black Lives Matter protests across the United States. The irony was almost poignant: it looked as if the hard-nosed mastermind of international affairs had failed to anticipate the constellation of threats to his own book.

Bolton, who refused to testify at the US House of Representatives’ impeachment hearings, may be the last person many Americans wish to hear from right now – not that he would ever deign to make any concessions to what a reader might want. The Room Where It Happened, an account of his 17 months as Trump’s national-security adviser, has been written with so little discernible attention to style and narrative form that he apparently presumes an audience that is hanging on his every word.

Known as a fastidious note taker, Bolton has filled this book’s nearly 500 pages with minute and often extraneous details, including the time and length of routine meetings and even, at one point, a nap. Underneath it all courses a festering obsession with his enemies, both abroad (Iran, North Korea) and at home (the media, “the High-Minded”, the former defence secretary Jim Mattis). The book is bloated with self-importance, even though what it mostly recounts is Bolton not being able to accomplish very much. It toggles between two discordant registers: exceedingly tedious and slightly unhinged.

Still, it’s maybe a fitting combination for a lavishly bewhiskered figure whose wonkishness and warmongering can make him seem like an unlikely hybrid of Ned Flanders and Yosemite Sam. His one shrewd storytelling choice was to leave the chapter on Ukraine for the end, as incentive for exhausted readers to stay the course. Along the way Bolton also mentions other disconcerting situations when Trump, he says, tried to ingratiate himself to President Recep Tayyip Erdogan, of Turkey, and President Xi Jinping, of China, by dangling the possibility of removing or easing pressure on the Turkish bank Halkbank and the Chinese telecom companies ZTE and Huawei.

Trump told Erdogan that Halkbank’s legal troubles for violating the administration’s sanctions on Iran would disappear once the “Obama people” who worked as prosecutors in the southern district of New York were “replaced by his people”, Bolton writes, deeming it an ultimately empty promise. “It was as though Trump was trying to show he had as much arbitrary authority as Erdogan.”

Trump’s conversation with Xi, in Bolton’s telling, was even more nakedly transactional. In the midst of talks about trade, Trump “turned the conversation to the coming US presidential election, alluding to China’s economic capability to affect the ongoing campaigns, pleading with Xi to ensure he’d win”, Bolton writes. “I would print Trump’s exact words, but the government’s prepublication review process has decided otherwise.”

In another book by another writer, such anecdotes might land with a stunning force, but Bolton fails to present them that way, leaving them to swim in a stew of superfluous detail. Besides, the moment he cites as the real “turning point” for him in the administration had to do with an attack on Iran that, to Bolton’s abject disappointment, didn’t happen.

In June 2019 Iran had shot down an unmanned US drone, and Bolton, who has always championed what he proudly calls “disproportionate response”, pushed Trump to approve a series of military strikes in retaliation. You can sense Bolton’s excitement when he describes going home “at about 5.30” for a change of clothes because he expected to be at the White House “all night”. It’s therefore an awful shock when Trump decided to call off the strikes at the very last minute, after learning they would kill as many as 150 people. “Too many body bags,” Trump told him. “Not proportionate.”

Bolton still seems incensed at this unexpected display of caution and humanity on the part of Trump, deeming it “the most irrational thing I ever witnessed any President do”. In the book Bolton is vague about the targets themselves, although it was later reported that he wanted one of them to be the Iranian commander Qassem Soleimani, killed on January 3rd by US air strikes four months after Bolton left the administration. On January 6th Bolton finally agreed to testify at the impeachment trial if the Republican-controlled United States Senate subpoenaed him – which, as predicted, it never did.

As for what Bolton might have said at the trial, his chapter on Ukraine is weird, circuitous and generally confounding. It’s full of his usual small-bore detail, but on the bigger, more pointed questions the sentences get windy and conspicuously opaque. He confirms what Fiona Hill, a White House aide, recalled him saying to her when she testified at the House impeachment hearings (including his memorable comparison of Rudy Giuliani, Trump’s personal lawyer, to a “hand grenade”). But Bolton declines to offer anything comparatively vivid in his own book, taking cover in what he depicts as his own bewilderment.

When it comes to Bolton’s comments on impeachment, the clotted prose, the garbled argument and the sanctimonious defensiveness would seem to indicate some sort of ambivalence on his part

He recalls a meeting in the Oval Office during which Trump said he wanted Giuliani to meet with Ukraine’s then president-elect, Volodymyr Zelenskiy, “to discuss his country’s investigation of either Hillary Clinton’s efforts to influence the 2016 campaign or something having to do with Hunter Biden and the 2020 election, or maybe both”. Yet Bolton – known for what a 2019 profile in the New Yorker called his “tremendous powers of recall” – said it was too much for him to fully understand. “In the various commentaries I heard on these subjects, they always seemed intermingled and confused, one reason I did not pay them much heed.” He resorts to making noises of concern about what he refers to as “the Giuliani theories”.

In an epilogue Bolton tries to have it multiple ways, saying that although he may have found Trump’s conduct “deeply disturbing”, it was the Democratic-controlled House that was guilty of “impeachment malpractice”. Instead of a “comprehensive investigation”, he sniffs, “they seemed governed more by their own political imperatives to move swiftly to vote on articles of impeachment.” He says they should have broadened their inquiry to include Halkbank and ZTE but then neglects to mention that nothing was stopping him from saying as much or from testifying if he was so terribly concerned.

“Had I testified,” Bolton intones, “I am convinced, given the environment then existing because of the House’s impeachment malpractice, that it would have made no significant difference in the Senate outcome.” It’s a self-righteous and self-serving sort of fatalism that sounds remarkably similar to the explanation he gave years ago for preemptively signing up for the Maryland air national guard in 1970 and thereby avoiding service in Vietnam. “Dying for your country was one thing,” he wrote in his 2007 book, Surrender Is Not an Option, “but dying to gain territory that anti-war forces in Congress would simply return to the enemy seemed ludicrous to me.”

When it comes to Bolton’s comments on impeachment, the clotted prose, the garbled argument and the sanctimonious defensiveness would seem to indicate some sort of ambivalence on his part – a feeling that he doesn’t seem to have very often. Or maybe it merely reflects an uncomfortable realisation that he’s stuck between two incompatible impulses: the desire to appear as courageous as those civil servants who bravely risked their careers to testify before the House and the desire to appease his fellow Republicans, on whom his own fastidiously managed career most certainly depends. It’s a strange experience reading a book that begins with repeated salvos about “the intellectually lazy” by an author who refuses to think through anything very hard himself. – New York Times