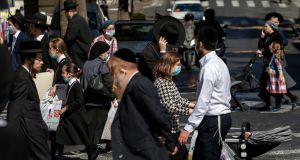 In an unprecedented display of civil disobedience, ultra-Orthodox schools and seminaries have reopened in defiance of Israeli government ordinances designed to control the spread of coronavirus.

As part of the first steps to ease the country’s one-month nationwide lockdown, kindergartens along with some small businesses were allowed to reopen on Sunday, but schools were to remain closed.

However, religious junior schools on Sunday, followed by yeshiva religious seminaries on Monday, complied with the instructions of Rabbi Haim Kanievsky, the 92-year-old leader of the powerful Lithuanian branch of the ultra-Orthodox community, and resumed classes. Rabbi Kanievsky himself fell ill with Covid-19 a few weeks ago.

The police refrained from forcibly shutting down any of the schools and from sending the pupils home, although several principals were fined.

Prime minister Binyamin Netanyahu, who needs the support of the ultra-Orthodox parties to maintain his coalition majority, called on the ultra-Orthodox public to comply with the government directives to help save lives, but refrained from ordering the police to step up enforcement. “We can’t send police to every street corner or every city,” he said. He added that regulations would be enforced “to the best of our ability”, and that the most important thing was to keep a tight seal on “red” cities with the highest infection rates – all of them ultra-Orthodox areas.

Unnamed cabinet ministers were quoted in the Israeli media as saying the religious parties had Mr Netanyahu “by the throat”.

“He’s incapable of standing up to them and of fighting resolutely against the spread of the coronavirus in ultra-Orthodox society. If we don’t stand up to the civil disobedience, it’ll lead us into a third lockdown,” one said.

Ultra-Orthodox schools prioritise religious studies with only minimal lessons in core subjects such as maths and English. Yitzhak Pindrus, the head of the United Torah Judaism Knesset faction, defended the decision to reopen the schools. “Rabbi Kanievsky is someone who has given his soul, for 90 years, to studying the Torah. The biggest spiritual danger to the Jewish people is not to study the Torah,” he said.

Prof Yedidia Stern from the Israel Democracy Institute said this was the first time the country had faced institutional civil disobedience on such a scale and it opened up the possibility of a culture war.

“We’ve had our fair share of turbulent demonstrations, protests and strikes, but they were never led by a major institution that instructed the masses to disobey the law as a policy decision that was designed to force the Knesset to bow,” he said. “It’s extremely dangerous since it sabotages our very ability to live with differences of opinion but with a fundamental acceptance of certain rules of the game, at the centre of which is the rule of law.”