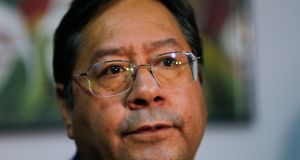 The Movement Towards Socialism (MAS) party looks set for a swift return to power in Bolivia just a year after its leader Evo Morales, was forced into exile after the country’s last election ended in chaos.

Initial results show MAS presidential candidate Luis Arce will win Sunday’s rescheduled poll with more than 50 per cent of all votes, thus avoiding the need for a run-off against his closest challenger, former president Carlos Mesa. The party will also have a majority in the new legislature.

Despite months of political tensions that produced scattered outbreaks of violence, voting went off peacefully. A final tally is expected to take several days but it is already clear Mr Arce spectacularly outperformed expectations and significantly increased the MAS share of the vote obtained by Mr Morales in last year’s annulled election.

The country’s first president from the indigenous majority, Mr Morales had attempted to win an unconstitutional fourth consecutive term. But the army called on him to go after allegations of electoral fraud sparked violent protests. Mr Morales fled the country, first to Mexico and then Argentina. He was banned by the country’s electoral authorities from standing in Sunday’s poll.

Once the scale of Mr Arce’s victory became apparent, interim president Jeanine Áñez took to social media to congratulate him, asking that he govern “thinking of Bolivia and of democracy”.

Ms Áñez has been widely criticised for refusing to limit her caretaker administration’s ambitions to hold a clean election to select a replacement for Mr Morales, and instead seeking to undo much of the legacy of 14 years of MAS government.

She was also accused by human rights organisations of orchestrating a political witch hunt against Mr Morales and other MAS leaders. From exile the former president celebrated victory, saying “the will of the people has been imposed”.

Mr Arce has said Mr Morales will be able to return to Bolivia once he is president but indicated he will have to resolve his problems with the justice system, where he faces multiple charges since fleeing into exile.

Mr Arce was the long-serving economics minister in the Morales administration, during which time he won a reputation for prudent orthodoxy, avoiding the populist mistakes of other left-wing governments in the region.

He also managed to distance himself somewhat from his former boss, whom he criticised for ignoring the result of a 2016 referendum in which a majority of voters rejected a proposal to allow Mr Morales run for a fourth term. Mr Morales had the MAS-dominated supreme court rule that term limits infringed his human rights.

The incoming president’s immediate task will be confronting the coronavirus pandemic, in which Bolivia has suffered one of the world’s worst mortality rates. He has also promised to launch a food assistance programme to combat hunger, which has followed the economic contraction caused by the pandemic and the country’s quarantine efforts.