US President Donald Trump voiced support for the idea of teachers having access to guns during an emotional White House meeting with students who survived the shooting. Video: The White House 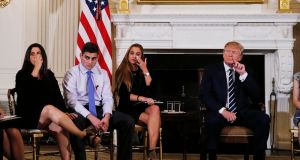 Surviving students react along with US president Donald Trump as they listen to survivors and the relatives of victims. Photograph: Jonathan Ernst / REUTERS

US president Donald Trump suggested on Wednesday that arming teachers could help prevent massacres such as last week’s mass shooting at a Florida high school.

Mr Trump voiced support for the idea during an emotional White House meeting with students who survived the shooting, and a parent whose child did not. The students appealed for action on school safety and guns.

“If you had a teacher ... who was adept at firearms, it could very well end the attack very quickly,” said Mr Trump, who acknowledged the idea would be controversial.

The US administration is seeking to show resolve against gun violence in the wake of last week’s shooting in Parkland, Florida, that left 17 dead and has prompted a growing call for stronger gun control.

Mr Trump promised to be “very strong on background checks,” adding that “we’re going to do plenty of other things” as he listened to students, parents and teachers at the White House.

He was faced with grieving families looking for answers. Few had concrete suggestions, but a few spoke in favour of raising age limits for buying assault weapons.

Parkland student Samuel Zeif said he has heard of 15-year-olds buying rifles. Cary Gruber, father of a Parkland student, implored Mr Trump: “It’s not left and right,” adding: “If you can’t buy a beer, shouldn’t be able to buy a gun.”

A strong supporter of gun rights, Mr Trump has nonetheless indicated in recent days that he is willing to consider ideas not in keeping with National Rifle Association orthodoxy, including age restrictions for buying assault-type weapons.

Over 40 people assembled in the State Dining Room. Among the group were six students from Parkland, including the student body president, along with their parents.

Also present were Darrell and Sandra Scott, whose daughter was killed in the Columbine, Colorado, shooting, and Nicole Hockley and Mark Barden, who lost children in Sandy Hook, Connecticut. Students and parents from the Washington area were also present.

Mr Trump held a card with notes for him in someone else's handwriting, including a reminder, captured by photographers, to tell meeting participants, "I hear you."

She added: “I am confident you will do the right thing.”

Television personality Geraldo Rivera had dinner with Mr Trump at his private Palm Beach club over the weekend and described Mr Trump as “deeply affected” by his meeting on Friday with survivors of the Flordia shooting .

Mr Rivera said he and Mr Trump discussed the idea of raising the minimum age to purchase assault-type weapons.

Mr Trump embraced gun rights on his campaign, though he supported some gun control before he became a candidate, backing an assault weapons ban and a longer waiting period to purchase a gun in a 2000 book.

Throughout the day on Wednesday, television news showed footage of student survivors of the violence marching on the Florida state Capitol, calling for tougher laws.

The protests came closer to Mr Trump too, with hundreds of students from suburban Maryland attending a rally at the Capitol and then marching to the White House.

Daniel Gelillo, a senior at Richard Montgomery High who helped organise the protest, said students were hoping to pressure lawmakers to act. He said that “up ‘til now nothing has quite fazed them”.

On Tuesday, Mr Trump directed the Justice Department to move to ban devices like the rapid-fire bump stocks used in last year’s Las Vegas massacre. The White House has also said Mr Trump was looking at a bill that would strengthen federal gun background checks.

But those moves have drawn criticism as being inadequate, with Democrats questioning whether the Justice Department even has authority to regulate bump stocks and arguing that the background check legislation would not go far enough.

“If ATF tries to ban these devices after admitting repeatedly that it lacks the authority to do so, that process could be tied up in court for years, and that would mean bump stocks would continue to be sold,” said Ms Feinstein, of California, calling legislation the only answer. -PA