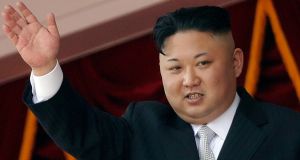 North Korea is facing severe food shortages due to the worst drought since 2001 with food imports needed to ensure children and the elderly do not go hungry, the United Nations’ food agency said on Thursday.

The Food and Agriculture Organisation (FAO) said rainfall in key producing areas fell well below the long-term average between April and June and badly affected staple crops including rice, maize, potatoes and soybean.

This disrupted planting activities and damaged the 2017 main season crops, according to an FAO report prepared with the European Commission’s Joint Research Centre.

The report said increased food imports, commercial or food aid, would be required over the next three months in the isolated nation to ensure adequate food supplies for the most vulnerable, including children and elderly.

Vincent Martin, FAO representative in China and North Korea, said the drought was expected to seriously impact Nampo city and the provinces of South and North Pyongan and Hwanghae which account for almost two-thirds of main season crops.

“Immediate interventions are needed to support affected farmers and prevent undesirable coping strategies for the most vulnerable, such as reducing daily food intakes,” Mr Martin said in a statement.

“It is critical now that farmers receive appropriate and timely agricultural assistance, including irrigation equipment and machinery.”

The FAO estimated that early season production plunged by more than 30 per cent from the previous year, and the situation would worsen during the 2017/2018 marketing year, with cereal imports and food aid likely to increase as a result.

North Korea suffered a devastating famine in the 1990s and has relied on international food aid to feed many of its 25 million people but support has fallen sharply in recent years. This was due to reluctance to allow monitoring of food distribution and also in part to sanctions implemented to punish North Korea over its weapons development programme.

The UN’s World Food Programme said it has also seen a steep drop in contributions while the 2016 Global Hunger Index said two in every five people in North Korea were undernourished.

The FAO said in the longer term it recommended using drought-tolerant crops and varieties, and finding ways for farmers and households to diversify their livelihoods to cope with natural disasters and climate change. – (Reuters)