Jared Kushner: the man oiling the wheels of US foreign policy 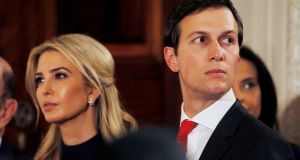 Ivanka Trump and her husband Jared Kushner during last month’s visit of German chancellor Angela Merkel at the White House. The couple are believed to be a calming presence on the president. Photograph: Jim Bourg/Reuters

When Chinese premier Xi Jinping visits his US counterpart Donald Trump at the president’s Mar-a-Lago resort in Florida this week, he will have one member of the Trump family to thank.

Jared Kushner, the husband of Trump’s daughter Ivanka and a senior adviser to the president, played an important role in setting up the meeting between the two men, the latest indication of his increasing prominence in the White House.

The 36-year-old businessman is emerging as a senior figure in the Trump administration, particularly in the realm of foreign policy, raising questions about his suitability and experience for a role usually associated with the secretary of state.

On Sunday, in a surprise announcement, the White House confirmed that Kushner had travelled to Iraq, the first senior official from the Trump administration to do so. Kushner, who travelled with General Joseph Dunford, the joint chiefs of staff, and the president’s homeland security adviser Thomas Bossert, met with prime minister Haider al-Abadi to discuss the fight against Islamic State. Rex Tillerson, the secretary of state, has yet to visit the region.

Trump’s son-in-law was also instrumental in setting up this week’s two-day visit by the Chinese leader to Florida, arguably the biggest foreign policy challenge to date given Trump’s comments about China during his campaign trail and his early questioning of the “One China” policy following a phone call with Taipei.

Kushner helped set up a call between Trump and the Chinese leader last month to smooth relations ahead of the trip. He and his wife Ivanka attended a party at the Chinese embassy in February to celebrate the Lunar New Year. He is also said to have been centrally involved in the current US thinking on North Korea, with Trump expected to call for more action from China in containing the nation’s nuclear threat.

Similarly, Kushner, who is Jewish, has taken a leading role in relations with Israel, facilitating a meeting between prime minister Binyamin Netanyahu and then candidate Trump at Trump Tower in September .

Like many members of the Trump administration, Kushner has no experience in government. Instead he has amassed formidable wealth through his work in the family business, which, like that of his in-laws, is in real estate. The family also owns the New York Observer.

Documents published by the White House late on Friday detailing the assets of some of its top officials showed that Kushner and his wife Ivanka have a combined estimated wealth of up to $700 million (€657 million). Although Kushner stepped down as chief executive of Kushner companies, conflict-of-interest questions continue to hang over both him and his wife, particularly over her stake in the Trump International Hotel, located a few blocks from the White House.

For many in the political establishment, Kushner's elevation coincides with the increasing marginalisation of the state department

It was also revealed that Kushner met the head of a state-owned Russian bank last year. He has volunteered to testify at the Senate committee investigation into Russian interference in last year’s election.

Behind the scenes, the couple are believed to be a calming presence on the president. They moved with their young family to Washington DC in January, renting a house in the upmarket district of Kalorama, around the corner from the Obamas. Insiders joke that the president sends his most outrageous tweets on Saturday mornings, when the couple are observing Shabbat, and are not around to tame his behaviour.

Their influence on Trump policy has been evident in recent weeks. It is understood that Ivanka persuaded her father to row back from any commitment to pull out of the Paris climate agreement in the executive orders on environmental policy signed earlier this month. Kushner may also be behind a softening of the rhetoric towards China.

For many in the political establishment, however, Kushner’s elevation coincides with the increasing marginalisation of the state department, which still has hundreds of vacancies and, in Tillerson, is being led by a low-profile secretary of state. Trump’s pledge to slash the department’s budget has sparked concerns about the future direction of US foreign policy as well as causing low morale among staff.

But the White House seems unfazed by questions over Kushner’s new-found authority. Pressed on why Kushner was sent to Iraq, Sean Spicer said it was a “win” for the government to have someone with a direct line to the president visiting the country. For the moment, at least, his elevated position seems secure.