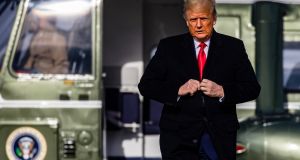 Us president Donald Trump has granted full pardons to 15 people and commuted all or part of the sentences of five others, in a wave of pre-Christmas pardons announced by the White House on Tuesday.

The beneficiaries include George Papadopoulos, a former campaign aide who pleaded guilty as part of the investigation into Russian meddling in the 2016 presidential election; Alex van der Zwaan, the Dutch son-in-law of the Russian billionaire German Khan; and three former Republican lawmakers.

Mr Trump’s use of the presidential pardon power has attracted considerable controversy. In November, for example, he pardoned his former national security adviser Michael Flynn, who pleaded guilty to lying to the FBI during the Russia investigation.

Speculation has flourished about who Mr Trump might pardon next, the former aides Paul Manafort and Rick Gates, the attorney Rudy Giuliani, the WikiLeaks founder, Julian Assange, and the National Security Agency whistleblower Edward Snowden among names commonly mentioned.

It has also been reported that Mr Trump has considered issuing a pre-emptive pardon for himself and members of his family who have worked in his White House.

Pardons and other acts of clemency, often to ordinary federal prisoners, are a common feature of the end of any presidency. According to the Pew Research Center, however, Mr Trump “has used his clemency power less often than any president in modern history”.

“While rare so far,” Pew added, “Trump’s use of presidential clemency has caused controversy because of the nature of his pardons and commutations. Many of Mr Trump’s clemency recipients have had a “personal or political connection to the president,” according to a July analysis by the Lawfare blog, and he has often circumvented the formal process through which clemency requests are typically considered.

Applying only to federal cases, presidential pardons do not imply innocence of the charges in hand. – Guardian