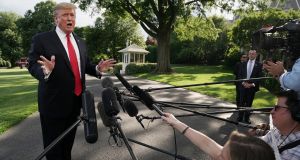 US president Donald Trump will visit Co Clare in early June, his first visit to Ireland as president, the White House has announced.

Mr Trump will touch down in Shannon on the afternoon of June 5th after a three-day state visit to Britain. He will then depart the following morning to attend the D-Day commemorations in Normandy.

There is no confirmation if the President will return to Shannon after the D-Day events.

Confirming the visit, the White House said: “President Donald J Trump and First Lady Melania Trump have accepted the invitation of Taoiseach Leo Varadkar of Ireland to visit Ireland while they are in Europe for a state visit to the United Kingdom, and for events in the United Kingdom and France to commemorate the 75th anniversary of D-Day. The President and Taoiseach will hold a bilateral meeting in Shannon on June 5.”

A spokeswoman for the Irish Embassy in Washington said: “We welcome the announcement of the visit by the US president. Detailed arrangements around the visit will be made public in due course.”

Following disagreements over the location, Shannon Airport emerged in recent days as the most likely venue for a meeting between the Taoiseach and the US president.

Shannon Airport management said it was aware that US and Irish Government officials are considering the airport as a potential venue for a private meeting between Mr Trump and Mr Varadkar.

It is likely that the airport’s presidential suite, the VIP room that has been used to accommodate many visiting dignitaries including US presidents and vice-presidents passing through Shannon, will likely be used for their meeting.

The Co Clare airport has been inspected by US officials and gardaí in preparation for Mr Trump’s expected visit, but management is believed to be still awaiting final details of Mr Trump’s arrival and departure times.

It is understood that high-level contacts between Mr Trump’s inner circle and Government officials close to Mr Varadkar took place over the weekend, after the White House expressed concern over US media reports about the delay in announcing the visit.

In particular, there was widespread feeling in Dublin that Mr Varadkar’s comments last week that protesters would be “welcome” had been misconstrued. Asked about potential protests last week, the Taoiseach said that, in a democracy, protest “is allowed and is welcome”.

The US president said in March that he planned to visit Ireland this year, mentioning in particular his golf course in Doonbeg.

“I will be coming at some point this year,” he said alongside Mr Varadkar in the Oval Office in March during the St Patrick’s Day celebrations.

“I missed it last year, and I would have loved to have been there. It’s a special place and I have a very warm spot for Doonbeg, I will tell you that. It is just a great place.”

Mr Trump had been scheduled to visit Ireland last November after the armistice centenary commemorations, but the trip was ultimately postponed.

He has not visited his Doonbeg golf club since his election as US president, though his son Eric Trump stayed there in 2017.

Prime minister Theresa May extended the invitation for a full state visit to Mr Trump shortly after his election. He is only the third US president, after Barack Obama and George W Bush, to have been invited to Britain for a full state visit. His engagements while in Britain are expected to include a state dinner at Buckingham Palace. An invitation to address parliament has not been extended, however.

Mr Trump last visited Ireland in 2014, when he was welcomed warmly by then minister for finance Michael Noonan, among others.

Both Mr Varadkar and his predecessor Enda Kenny invited Mr Trump to visit Ireland when they met the US president as part of the annual St Patrick’s Day celebrations in the White House.