Bolsonaro threatens US journalist with jail over ‘Car Wash’ leaks 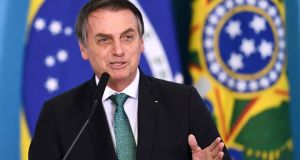 Brazilian president Jair Bolsonaro: “A scoundrel, to avoid a problem like this, he marries another scoundrel and adopts children in Brazil.” Photograph: Evaristo Sa

Brazil’s president, Jair Bolsonaro, has threatened a US journalist with jail for publishing damaging leaks about the country’s historic Car Wash anti-corruption investigation.

The far-right leader made the threat against Glenn Greenwald even as he acknowledged that a new measure by his government to facilitate the expulsion of foreigners from Brazil could not apply to the US citizen because he has a Brazilian husband and children.

“He is not affected by the measure,” said Mr Bolsonaro at a military event at the weekend. “Because he is married to another man and has adopted children in Brazil. A scoundrel, to avoid a problem like this, he marries another scoundrel and adopts children in Brazil.

“This is the problem we have. He is not leaving. He can relax. Maybe he will do jail here in Brazil.”

Greenwald, whose reporting on the Edward Snowden revelations won a Pulitzer prize, lives in Rio de Janeiro with his husband David Miranda, a left-wing deputy in Brazil’s congress.

The Brazilian edition of his Intercept website has, since the beginning of June, published a series of private conversations among participants in the Car Wash investigation that call into question the probe’s practices in tackling a multibillion-euro corruption scandal involving state companies and private sector contractors.

In particular, the revelations have cast doubt on the impartiality of the crusading judge Sérgio Moro during his handling of a case against former left-wing president Luiz Inácio Lula da Silva, whom he convicted and sentenced to jail for corruption in 2017.

Mr Moro is now justice minister in the Bolsonaro administration and overseeing the investigation into the Intercept leaks. Last week a group of local hackers was arrested for hacking into the phones of Mr Moro and Car Wash prosecutors and leaking the contents of their Telegram messaging app chats to the website.

The Bolsonaro administration has sought to implicate Greenwald in criminal activity related to the leaks but the hackers have supposedly told police they approached the Intercept and passed on the material without receiving payment in return.

In a major embarrassment for Brazilian authorities, federal police said the hackers attacked about 1,000 mobile phones, gaining access to devices belonging to senior figures in Brazil’s political and judicial worlds, including that of the president.

This admission comes six years after the documents leaked by Mr Snowden revealed the US had tapped the phone of Brazil’s then-president Dilma Rousseff, causing a diplomatic rift between the two countries and severe embarrassment to Brazil’s intelligence apparatus.

After last week’s arrests, Mr Moro quickly promised to destroy all material the hackers had gleaned from the mobiles of authorities. But he was quickly accused of seeking to destroy evidence that could prove his own impartiality in the trial of Lula, and warned that only a judge had the authority to order the destruction of evidence seized by police.

Brazil’s powerful bar association has filed a court request to prevent the evidence obtained from the hackers from being summarily destroyed.