Trump reassures Kim he will not face same fate as Gadafy

US president Donald Trump has refused to commit to meeting North Korean leader Kim Jong-un in June, the White House says they are still preparing for the summit. Video: The White House 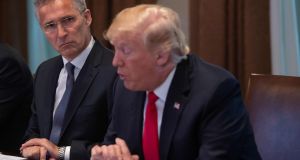 Nato Secretary General Jens Stoltenberg listens to US President Donald Trump during a meeting in the Cabinet Room at the White House. Photograph: Nicholas Kamm/AFP/Getty Images

US president Donald Trump sought to reassure North Korea about US intentions on Thursday as he said that the “Libya model” of denuclearisation proposed by national security adviser John Bolton was not on the table.

In impromptu comments in the Oval Office ahead of a meeting with Nato Secretary General Jens Stoltenberg, Mr Trump said the US had received no information suggesting that the June 12th summit in Singapore would not take place.

Mr Trump also suggested that the US would “protect” North Korean dictator Kim Jong-un. “He will get protections that are very strong,” he said, adding “the best thing he could do is make a deal”.

In lengthy comments, Mr Trump repeatedly said that the Libya model was not under consideration.

“The Libyan model was a much different model. We decimated that country. We never said to Gadafy, ‘Oh, we’re going to give you protection; we’re going to give you military strength.’ We went in and decimated him and we did the same thing with Iraq, ” he said, referring to the former Libyan leader Col Muammar Gadafy. “That model would take place if we don’t make a deal,” he said, adding: “We cannot let that country have nukes, we just can’t do it.”

North Korea warned earlier this week that it could cancel the Singapore summit, specifically deriding the suggestion that the Libyan model of denuclearisation could be used as a template for North Korea. While Libya did surrender its nuclear weapons, Col Gadafy was ultimately killed by US-backed rebels in 2011.

Mr Trump said that practical preparations were under way for the summit and further details would be released soon. “If it doesn’t take place that’s fine, and if it does take place I think tremendous things can happen.”

Congratulations America, we are now into the second year of the greatest Witch Hunt in American History...and there is still No Collusion and No Obstruction. The only Collusion was that done by Democrats who were unable to win an Election despite the spending of far more money!

Wow, word seems to be coming out that the Obama FBI “SPIED ON THE TRUMP CAMPAIGN WITH AN EMBEDDED INFORMANT.” Andrew McCarthy says, “There’s probably no doubt that they had at least one confidential informant in the campaign.” If so, this is bigger than Watergate!

The president also sent out a warning shot to China ahead of an expected meeting with Chinese vice-premier Liu He later on Thursday.

A delegation from Beijing is in Washington for trade talks, with Mr Trump suggesting earlier this week that he could reconsider punitive measures on Chinese telecoms firm ZTE.

Earlier in the day, Mr Trump hit out at the investigation led by Robert Mueller into Russian interference in the 2016 election in a series of tweets, one year on from the appointment of the Special Counsel.

Mr Trump denounced the investigation as “disgusting, illegal and unwarranted.”

“Congratulations America, we are now into the second year of the greatest Witch Hunt in American History .?.?. and there is still No Collusion and No Obstruction. The only Collusion was that done by Democrats who were unable to win an Election despite the spending of far more money!” he tweeted.

Mr Trump also referenced recent reports that there may have been a source within the Trump campaign helping the FBI with their investigation into Russian interference in the election.

“Wow, word seems to be coming out that the Obama FBI ‘SPIED ON THE TRUMP CAMPAIGN WITH AN EMBEDDED INFORMANT.’ Andrew McCarthy says, ‘There’s probably no doubt that they had at least one confidential informant in the campaign’”, Mr Trump tweeted, referring to a former federal prosecutor who made the claims on morning chatshow Fox and Friends. “If so, this is bigger than Watergate!” he added.

Several Trump aides went on the offensive on Thursday, with Rudy Giuliani telling Fox News that the investigation should be ended. “We’re going to have to look into whether we can challenge the legitimacy of the entire investigation. Maybe a special counsel, special prosecutor, never should have been appointed,” he said.

Addressing the issue during the daily White House press briefing, Sarah Huckabee Sanders said: “ The president knows that there was no collusion in the campaign. It’s gone on for over a year, they’ve found no evidence of collusion. It’s clearly a witch-hunt.”

A year after the justice department appointed former FBI chief Mr Mueller to lead the Russia investigation, the Special Counsel has charged 19 people and interviewed dozens of people close to Mr Trump and his campaign team.

Mr Trump has yet to be interviewed, though it is understood that Mr Mueller’s team has spoken to the president’s lawyers about a possible interview and the scope of any testimony that might take place.

Separately, a New York court on Thursday rejected a request by Mr Trump’s legal team to stay a defamation case taken by former Apprentice contestant Summer Zervos against him. The decision by the Supreme Court’s appellate division could mean that the court gains access to documents and records that could be damaging to the president.