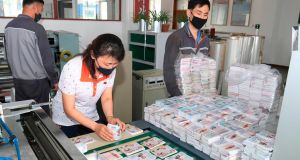 North Koreans preparing propaganda leaflets to send to the South at an undisclosed location in North Korea on Saturday. Photograph: KCNA via KNS/AFP via Getty Images

North Korea has also prepared 3,000 balloons to carry the leaflets across the world’s most heavily armed border and scatter them over the South to retaliate against the leaflets that defectors from the North have sent to their communist home country in recent months, the news agency said.

The defectors have continued their propaganda efforts despite protests from Pyongyang and inter-Korean agreements to stop them.

“The largest-ever distribution of leaflets against the enemy are almost complete,” the North’s official Korean Central News Agency reported, adding that publishing and printing houses in Pyongyang had printed 12 million leaflets, with those in provinces preparing to print millions more.

“The time for retaliatory punishment is drawing near,” it added. “South Korea has to face the music.”

North Korea has been expressing its growing frustration with the United States and South Korea, especially since the second summit meeting between the North’s leader, Kim Jong-un, and US president Donald Trump collapsed in Vietnam in February last year.

This month, it seized upon the leaflets sent by activists in South Korea to start reversing a fragile détente on the Korean Peninsula, cutting off all communications lines with South Korea and blowing up a joint liaison office it had operated with the South in the past two years.

Leaflets have been a common psychological warfare tool used by both Koreas since the 1950-53 Korean War. They had agreed to stop such cross-border propaganda, including loudspeaker broadcasts along the border, several times since the 1970s. They also tried to de-escalate their propaganda duel after a landmark summit in 2000 at which they agreed to promote reconciliation.

The two Koreas again reached the same agreement when Kim and President Moon Jae-in of South Korea met in 2018.

But anti-North Korean activists in the South have resumed sending propaganda balloons into the North in recent years as inter-Korean relations have soured, especially over the North’s nuclear weapons programme.

This month, South Korea vowed to use the police to stop any attempt by the activists to send propaganda balloons to the North. It said that the leaflets did little other than provoking the North and also created rubbish in the South because many of the balloons never make it across the border. Seoul is also pushing to revise the domestic laws to ban such leaflets.

On Monday, the North said the leaflets from the South were “an intolerable insult” about the North Koreans’ “most sacred mental core”. It said the South Koreans would stop sending their balloons only when they saw North Korean leaflets falling from the sky and experienced “how painful and how irritating it is to dispose of leaflets and waste”.

North Korea did not clarify when it would start releasing its balloons across the border, but said its leaflets would reflect “the wrath and hatred” of its people.

Over the weekend, North Korean state news media released photos of leaflets produced in Pyongyang. They mocked Moon as a greedy person who had gorged on sturgeon, mushrooms and other gourmet dishes while visiting Pyongyang in 2018 but had since reneged on his promise to improve economic ties on the peninsula.

Photos also showed plastic bundles filled with leaflets, cigarette butts and ashes, hair and other rubbish – presumably ready to be dumped in the South.

North Korea sent similar rubbish payloads by balloon in 2016, calling Park Geun-hye, then the leader of the South, a “filthy president”, as South Korea turned on high-powered loudspeakers to blare pop songs and harsh criticism of Kim across the border. – New York Times