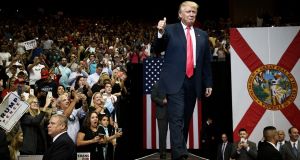 US president Donald Trump at a campaign event in Jacksonville, Florida in 2016. Trump will deliver his Republican convention speech in Jacksonville, inside an arena that holds 15,000 people in August. File photograph: Scott McIntyre/The New York Times

US president Donald Trump has demanded that those attending his first election rally of the summer, must sign a declaimer stating they will not sue his campaign if they contract coronavirus, amid fears that America could be braced for a second wave of infections.

The Donald Trump re-election campaign announced details of Mr Trump’s first rally since the coronavirus pandemic shut wide swathes of the country, which will take place on June 19th in Tulsa, Oklahoma. Those who want to attend the event are obliged to click a box on the campaign website “acknowledging that an inherent risk of exposure to COVID-19 exists in any public place where people are present.”

The disclaimer reads: “By attending the Rally, you and any guests voluntarily assume all risks related to exposure to COVID-19 and agree not to hold Donald J. Trump for President, Inc.; BOK Center; ASM Global; or any of their affiliates, directors, officers, employees, agents, contractors, or volunteers liable for any illness or injury.”

The move by the Trump re-election campaign comes as the US president has vowed to hold a series of rallies in, Arizona, Florida, North Carolina and Texas in the coming weeks, despite the ongoing threat from Covid-19.

The number of coronavirus cases in the United States has passed 2 million, and public health experts have warned of a possible second wave, as states ease social distancing restrictions. Southern states like Texas and Arizona, who refrained from strict lockdown measures in the early days of the crisis have been reporting a rise in cases in recent weeks. More than 20 states have reported a rise in infection.

Mr Trump’s decision to hold his first rally in Tulsa was controversial, given that June 19th is traditionally a date that marks the end of slavery in the United States. Tulsa was also the site of one of the most infamous instances of racial violence in US history when hundreds of African-Americans were massacred.

Also on Thursday, the Republican National Committee (RNC) announced that it would move most of the Republican convention to Jacksonville, Florida, following a feud between Mr Trump and North Carolina’s Democratic governor Roy Cooper. The Republican Party had been scheduled to hold its late-August convention in Charlotte, but Mr Cooper has been unable to guarantee that the gathering can take place as planned due to social distancing restrictions.

“Not only does Florida hold a special place in President Trump’s heart as his home state, but it is crucial in the path to victory in 2020,” said RNC chairwoman Ronna McDaniel. “We look forward to bringing this great celebration and economic boon to the Sunshine State in just a few short months.” Because of contractual obligations, some of the event will be held in Charlotte, though Mr Trump will accept the nomination in Jacksonville. Florida, with its 29 electoral college votes, is likely to be a key battleground in November’s presidential election.

Use of force on protesters

As the debate over police reform continued in the United States following the death of African-American George Floyd, Mr Trump praised the use of force to dispel protesters in Minneapolis last week - the city where Mr Floyd (46) died on May 25th after a white police officer held him down by pressing his knee into his neck for almost nine minutes.

Radical Left Governor @JayInslee and the Mayor of Seattle are being taunted and played at a level that our great Country has never seen before. Take back your city NOW. If you don’t do it, I will. This is not a game. These ugly Anarchists must be stopped IMMEDIATELY. MOVE FAST!

Speaking at a roundtable event on policing ahead of a fundraiser in Dallas last night, Mr Trump compared the actions of the National Guard in Minneapolis, who used tear gas to forcibly remove protests, to “a knife cutting butter.”

“I’ll never forget. You saw the scene on that road . . . they were lined up. Man, they just walked straight. And yes, there was some tear gas and probably some other things,” he said. “And the crowd dispersed and they went through. By the end of that evening, and it was a short evening, everything was fine.”

Mr Trump, who has firmly positioned himself as a supporter of tough police action as authorities deal with the protests that have erupted across the United States since the death of Mr Floyd, warned of the danger of “falsely labelling tens of millions of decent Americans as racist or bigots.”

The fall-out from the Trump administration’s use of law enforcement to disperse protesters near the White House last week has intensified, as the nation’s top military commander apologised for accompanying Mr Trump to St John’s Church where he posed for a photo.

In a highly unusual intervention, the chairman of the joint chiefs of staff, Mark Milley, said he regretted appearing with Mr Trump in Lafayette Square as the president made his way to the church where he held up the bible, a move widely denounced by critics.

“As many of you saw the results of the photograph of me in Lafayette Square last week - that sparked a national debate about the role of the military in civil society,” he said in an online address to students graduating from the National Defence Academy.

“I should not have been there. My presence in that moment, and in that environment, created a perception of the military involved in domestic politics.”

He continued: “As a commissioned, uniformed officer it was a mistake that I have learned from . . . We who wear the cloth of our nation come from the people of our nation and we must hold dear the principle of an apolitical military that is so deeply rooted in the essence of our Republic.”

The mea culpa from the Pentagon’s top military commander is the latest pushback by senior members of the military over the White House’s handling of public protests last week over the death of Mr Floyd. Defence secretary Mark Esper has also said he regretted appearing in the picture.

But despite the growing unease in military ranks about Mr Trump’s threat to deploy the US army on America’s streets, the president has not backed down. In recent days he has turned his sights to Seattle, suggesting that he could intervene in the city which has seen widespread demonstrations by activists.

“Take back your city NOW,” Mr Trump wrote in a tweet addressed to Seattle’s mayor and the Governor of Washington State. “If you don’t do it, I will. This is not a game.” He later added: “Domestic Terrorists have taken over Seattle, run by Radical Left Democrats, of course. LAW & ORDER!” In a tweet sent as he flew to Dallas on Air Force One yesterday (Thursday) he claimed that “anarchists just took over Seattle.”

Mr Trump also weighed-in to the deepening cultural row over the renaming of confederate sites and monuments amid widespread public anger over perceived racism in the US police force.

The president said he opposed renaming several military bases that were named after confederate leaders in the US civil war, including Fort Bragg in North Carolina and Fort Benning in Georgia.

“The United States of America trained and deployed our HEROES on these Hallowed Grounds, and won two World Wars,” he tweeted. “Therefore, my Administration will not even consider the renaming of these Magnificent and Fabled Military Installations. Our history as the Greatest Nation in the World will not be tampered with. Respect our Military!”

The announcement puts him at odds with the Pentagon which was said to be considering renaming some of those sites, partly as a gesture of inclusiveness to many of the men and women of colour in the US military.

Also on Thursday, House Speaker Nancy Pelosi, a Democrat, reiterated her view that confederate statues in the US Capitol should be taken down. “The American people know these names have to go,” she said, adding that it’s a “perfect time for us to move . . . statues” of Confederate figures like Alexander Stephens and Jefferson Davis from the Capitol.

Nascar - the national association for stock-car racing - announced a ban on confederate flags at its events this week, amid a renewed focus on the meaning of a symbol that was used in the pro-slavery side in the civil war.