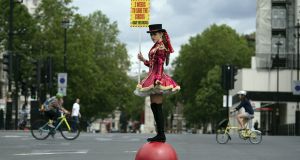 A circus performer in Whitehall, London. Circuses have handed a petition to Downing Street asking Boris Johnson to allow them to reopen. Photograph: EPA/Will Oliver

Britain’s chancellor of the exchequer Rishi Sunak will on Wednesday announce billions of pounds in further spending in an attempt to ease the economic damage caused by coronavirus.

A £2 billion Kickstarter Scheme will see the government fund six-month work placements in private firms for young people aged 16-24 who are claiming Universal Credit and at risk of long-term unemployment.

The government will fund the cost of the national minimum wage for 25 hours a week and employers will be able to top up that wage.

“Young people bear the brunt of most economic crises, but they are at particular risk this time because they work in the sectors disproportionately hit by the pandemic. We also know that youth unemployment has a long-term impact on jobs and wages, and we don’t want to see that happen to this generation,” Mr Sunak is expected to tell MPs.

About half a million people in Britain aged 24 and under were claiming Universal Credit at the end of May, twice the figure two months previously. The Kickstart Scheme will only operate in England, Scotland and Wales, but the Treasury said on Tuesday night that Northern Ireland would receive additional funding in respect of the scheme.

Labour’s shadow chancellor Anneliese Dodds welcomed the scheme, but said the government had yet to rise to the scale of the unemployment crisis.

“The urgent priority right now is to prevent additional unnecessary unemployment in the first place by abandoning the government’s ‘one-size-fits-all’ approach to the removal of the job retention and self-employed schemes. In addition, older people who become unemployed, and those living in particularly hard-hit areas, will also need tailored support.”

Meanwhile, Downing Street on Tuesday refused to apologise after Boris Johnson appeared to blame care homes for the number of people who died of coronavirus in such settings.

“We discovered too many care homes didn’t really follow the procedures in the way that they could have, but we’re learning lessons,” Mr Johnson said on Monday.

The prime minister’s official spokesman said he was pointing out that less was known about the virus a few months ago, adding that care homes had done “a brilliant job under very difficult circumstances”.

In the House of Commons on Tuesday, Labour’s shadow health secretary Jonathan Ashworth said people working in care homes had been insulted by the prime minister’s “crass” remarks.

“Care providers were sent conflicting guidance throughout this outbreak, staff could not access testing until mid-April and are still not tested routinely, PPE supplies have been inadequate, thousands of families have lost their loved ones in care homes to this disease, care workers themselves have died on the front line,” he said.

Health secretary Matt Hancock said the prime minister was referring to the fact that because not enough was known about asymptomatic transmission of the virus, the correct procedures were not known.

“We’ve been constantly learning about this virus from the start and improving procedures all the way through, and I pay tribute to the care homes in this country who have done so much to care for the most vulnerable throughout the crisis,” he said.