Coronavirus: 60 injured in Serbia in protests over reimposed lockdown

Chief Medical Director of United Memorial Medical Center Houston, Texas, Dr. Joseph Varon predicts the city will be as bad as New York was two months ago, as the number of coronavirus cases rises on a daily basis. Video: Reuters 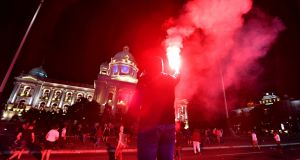 Serbian police said 23 people were detained and scores of police officers and demonstrators injured in clashes that erupted after the country’s president announced the return of coronavirus lockdown measures.

Police director Vladimir Rebic told the state RTS television that police are working to identify more people who took part in the rioting in central Belgrade which left 43 police officers and 17 demonstrators injured.

Thousands of people came out into the streets on Tuesday evening after Serbian president Aleksandar Vucic announced that a curfew will be imposed for the entire weekend in Belgrade in the wake of Serbia reporting the highest single-day death toll of 13 amid 299 new Covid-19 cases.

Clashes erupted after some supporters of right-wing groups stormed the parliament during protests. Police responded by throwing tear gas.

Mr Vucic has described the virus situation in Belgrade as “alarming”, saying hospitals in Belgrade were full. But many in Serbia blame the populist strongman for lifting the previous lockdown measures just so he would cement his grip on power after parliamentary elections. He has denied those claims.

Mr Rebic said “hooligans” threw rocks, bottles and other objects at police and set five police vehicles on fire. Videos from the scene showed police beating up some of the demonstrators and detaining them.

The Trump administration has formally notified the United Nations of its withdrawal from the World Health Organisation amid the coronavirus pandemic, although the pullout will not take effect until next year, meaning it could be rescinded under a new administration of if circumstances change.

The withdrawal notification, delivered on Monday, come after US president Donald Trump’s vow in late May to terminate US participation in the WHO, which he has harshly criticised for its response to the Covid-19 pandemic and accused of bowing to Chinese influence.

The withdrawal notice was sent to UN Secretary-General Antonio Guterres on Monday and will take effect in a year, on July 6th, 2021, the State Department and the United Nations said on Tuesday.

Under the terms of the withdrawal, the US must meet its financial obligations to the WHO before it can be finalised.

The US, which is the agency’s largest donor and provides it with more than $400 million, currently owes the WHO some $200 million in current and past dues.

In late May, less than two weeks after warning the WHO that it had 30 days to reform or lose US support, Mr Trump announced his administration was leaving the organisation due to what he said was its inadequate response to the initial outbreak of coronavirus in China’s Wuhan province late last year.

The president said in a White House announcement that Chinese officials “ignored” their reporting obligations to the WHO and pressured the organisation to mislead the public about an outbreak that has now killed more than 130,000 Americans.

The withdrawal notification was widely denounced as misguided, certain to undermine an important institution that is leading vaccine development efforts and drug trials to address the Covid-19 outbreak.

“The administration’s move to formally withdraw from WHO amid the greatest public health crisis that Americans and the world have faced in a century is short-sighted, unnecessary, and unequivocally dangerous,” said UN Foundation president Elizabeth Cousens.

“WHO is the only body capable of leading and co-ordinating the global response to Covid-19.

“Terminating the US relationship would undermine the global effort to beat this virus — putting all of us at risk.”

The One Campaign, which supports international health projects, called it an “astounding action” that jeopardises global health.

“Withdrawing from the World Health Organisation amidst an unprecedented global pandemic is an astounding action that puts the safety of all Americans and the world at risk.

“The US should use its influence to strengthen and reform the WHO, not abandon it at a time when the world needs it most,” One president Gayle Smith said.

Mr Trump demanded on Tuesday that schools reopen physically in autumn, pressing his drive to get the country moving again even as the coronavirus pandemic surged through much of the United States and threatened to overwhelm some health care facilities.

The president’s focus on schools and colleges, freighted with campaign-season politics, came as the United States topped 3 million coronavirus infections and the vast majority of states were experiencing new spikes.

In Florida, more than 40 hospitals reported having no more beds in their adult intensive care units. In Ohio, the governor ordered residents in seven counties to wear masks in public, including those containing Columbus, Cincinnati and Cleveland.

Meanwhile, Australia’s prime minister has said a shutdown of the nation’s second-largest city is necessary and promised continuing financial support for businesses which fear they will not survive a second lockdown.

The Victoria state government said Melbourne and some surrounding areas will lock down for six weeks from Wednesday night because the rate of coronavirus spread is unsustainable.

“I hope it isn’t for that long. I hope it’s for a shorter period as possible,” he said.

Victoria authorities announced another 134 cases in the latest 24 hours.

Breaches of infection controls at Melbourne hotels where international travellers are required to isolate for 14 days have been blamed for much of the disease spread. The state government last week responded by banning new arrivals at Melbourne Airport for two weeks.

Mr Morrison said he wanted to reduce the numbers of Australian citizens, permanent residents and foreigners exempt from Australia’s travel ban landing at Australian airports because of the strain on hotel quarantine.

South Korea reported 63 new cases of the coronavirus as health authorities scrambled to stem transmissions tied to places such as churches, temples, restaurants and workplaces.

The figures on Wednesday took the national caseload to 13,244 infections, including 285 deaths.

Twenty-nine of the new cases came from the densely populated Seoul area, which has been at the centre of a virus resurgence since late May. At least 33 cases were linked to international arrivals.

Elsewhere, Brazil’s President Jair Bolsonaro said he is confident of swiftly recovering from Covid-19 as he has been treated with hydroxychloroquine, the anti-malaria drug that has not been proven effective against coronavirus.

Mr Bolsonaro said he tested positive for Covid-19 on Tuesday after months of playing down its severity while deaths mounted rapidly inside the country.

He had often appeared in public to shake hands with supporters and mingle with crowds, at times without a mask. – AP/Agencies