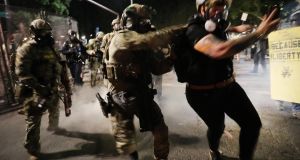 The Trump administration is to send more federal agents to Portland, Oregon, according to reports, after clashes between demonstrators and law-enforcement agents intensified in recent days.

The western city, which has seen almost two months of nightly protests since the death of African-American man George Floyd at the hands of police in late May, was racked by fresh confrontations between heavily-armed federal agents and protesters over the weekend.

The Washington Post reported that the US Marshals Service has decided to send 100 more marshals. The Customs and Border Protection Agency is also considering sending 50 agents, the report said.

US president Donald Trump has defended his right to send the federal agents to cities across the country over the wishes of local officials, stating that he is defending federal buildings, such as the courthouse in Portland.

But opponents have accused him of inflaming tensions that have ripped through the United States since the death of Mr Floyd by deploying heavily militarised agents to the streets.

Inside Politics · Repost: Michael Lewis on Cronyism in The Trump Administration & The Unsung Virtues of Civil Servants

Seattle and Los Angeles also saw widespread unrest over the weekend, recalling the early days of the national protests over the death of Mr Floyd. Dozens of arrests were made and protesters and law-enforcement agents were injured. One person was killed when a car drove into a crowd of demonstrators in Austin, Texas. Sixteen arrests were made in Richmond, Virginia, on Sunday night.

Mr Trump disputed characterisations of the protests on Twitter on Monday, claiming that federal agents in Seattle were not playing an active role. “Homeland Security or Federal Forces are little involved in Seattle, other than we have a large standby team in case of emergency. The media is calling that one wrong also. In Portland, we are protecting Federal property, including the Courthouse which wouldn’t last a day!”.

The Trump campaign has seized on the unrest taking place in some cities to highlight its stance on law and order, spending millions of dollars on campaign ads accusing Democratic presidential hopeful Joe Biden of being soft on crime.

Acting director of homeland security Chad Wolf said on Sunday that local leadership in cities such as Portland had “fostered an environment that allows these criminals to do this throughout the night, untouched, absolutely untouched”.

“It’s time for Portland to join other responsible cities around this country working with federal law enforcement to address this violence,” he said.

Meanwhile, Alabama senator Tom Cotton defended comments he made during a radio interview, where he described slavery as a “necessary evil”. Discussing the recent anti-racist protests, Mr Cotton said: “As the Founding Fathers said, it was the necessary evil upon which the union was built, but the union was built in a way, as [Abraham] Lincoln said, to put slavery on the course to its ultimate extinction.”

Mr Cotton introduced a Bill to Congress last week which aims to stop funding for a school history programme based on a ground-breaking project by the New York Times. Titled “1619” – a reference to the year the first slaves were brought from Africa to the United States – it examines the foundation of the American nation through the prism of slavery.

An opinion piece written by Mr Cotton for the New York Times last month following the death of Mr Floyd prompted a backlash from some journalists within the company and forced the resignation of the opinion editor.

The conservative senator was instrumental in blocking the extension of the E3 visa scheme for Australian citizens to Ireland in 2018, which would have opened up a new opportunity for Irish citizens to live and work in the US.