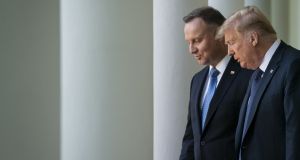 US president Donald Trump hit out at “delinquent” Nato members as he called on all members of the transatlantic alliance  – particularly Germany –  to spend 2 per cent of GDP on defence spending.

Speaking at a joint press conference with Polish president Andrzej Duda at the White House, Mr Trump asserted that Poland was one of eight European Nato members to meet its financial commitments to the alliance.

“The United States is defending a lot of countries that are delinquent in what they are supposed to be paying,” Mr Trump said.

While he claimed that the US had secured an extra $400 billion in new spending from Nato members, he said “we will be only satisfied when all members are paying their fair share”.

Confirming that the US would be withdrawing troops from Germany, Mr Trump claimed that Germany owed “close to a trillion dollars” to Nato “when you add it all up”.

Mr Trump confirmed that the US would “probably” going to be sending troops to Poland from Germany, noting that the number of US military personnel in Germany would reduce from 52,000 to 25,000.

“Some will be coming home, some will be going to other places in Europe. Poland will be one of the places,” he said.

He added that Poland would be paying for the troops to be stationed there, while he also praised Poland for the purchase of 32 F35 fighter jets.

Mr Duda, who faces an election on Sunday, was the first foreign leader to meet Mr Trump at the White House since Taoiseach Leo Varadkar’s visit in March. It is his fifth meeting with the US president.

Mr Trump praised Poland’s protection of its borders, and “vigilant efforts to uphold the rule of law” – an issue that has provoked fury in Brussels as Poland’s right-wing government has pushed through a series of anti-democratic laws.  He also predicted that Mr Duda would do very well in the election.

“He’s doing a terrific job. The people of Poland think the world of him…I don’t think he needs my help. He will do very well with or without us. He’s going to have a great success.”

Asked about the possibility of further police reform in the wake of George Floyd’s death after Democrats blocked legislation put forward by the Republican-controlled Senate this week, claiming it did not go far enough, Mr Trump accused Democrats of wanting to defund the police.

“The Democrats want to weaken our police, take away our community….they want to take away a lot of strength from our police and law enforcement generally. We won’t do anything that’s going to hurt our police.”

Mr Trump also pledged to issue an executive order on statues before the end of the week, although he said there were “very strong laws already on the books” which can lead to prison sentences of 10 years for those who desecrate monuments.

Amid a nationwide debate about the future of confederate and other statues, on Monday, protesters tried to remove a statue of former president Andrew Jackson outside the White House. The 19th century president’s treatment of native Americans has long been a source of controversy.

Earlier, during a meeting with Mr Duda in the Oval Office, Mr Trump accused the Obama administration of spying on his 2016 election campaign as he welcomed a court ruling ordering the dismissal of a case against his former national security adviser Michael Flynn.

“What happened to General Flynn should never happen again,” Mr Trump said. “He was treated horribly by a group of very bad people.”