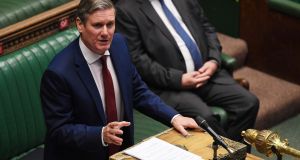 Labour leader Keir Starmer. He said of Boris Johnson: “He has been found out. He either dodges the question or he gives dodgy answers.” Photograph: Jessica Taylor/UK Parliament/AFP via Getty Images

Britain faces a real risk of a second wave of coronavirus and the likelihood of local flare-ups, the heads of 15 of the country’s top health professional groups and unions have warned. But Downing Street rejected their call for an urgent review of how prepared the health system and infrastructure is for a second wave of infections.

“While the future shape of the pandemic in the UK is hard to predict, the available evidence indicates that local flare-ups are increasingly likely and a second wave a real risk.

Polls show majority support for a public inquiry into the government’s handling of the coronavirus crisis but the signatories said the review they were proposing should not be about looking back or attributing blame.

“It should be quick, broad, ambitious, able to command widespread public and stakeholder trust, and needs to happen now. It should focus on those areas of weakness where action is needed urgently to prevent further loss of life and restore the economy as fully and as quickly as possible,” they said.

Boris Johnson’s official spokesman said the government had taken unprecedented action to protect the NHS and that Nightingale hospitals built for the crisis but mostly unused would be available in the event of a second wave of infections.

In the House of Commons, Labour leader Keir Starmer pressed the prime minister on the failure of Britain’s contact tracing system to reach two out of three of those estimated to have been infected with coronavirus this week and the government’s failure to launch a contact tracing app.

Mr Johnson claimed that the NHS was reaching “the vast majority” of those infected and he asserted that no country in the world has a working contact tracing app.

Mr Starmer pointed out that a number of countries, including Germany, have launched apps that have already been downloaded millions of times.

“He has been found out. He either dodges the question or he gives dodgy answers,” he said.

“This was a decision taken with an open mind on the merits of the case after a thorough decision-making process,” Mr Jenrick told MPs.