A lot of states who don’t have a big problem have asked me about it, US president says 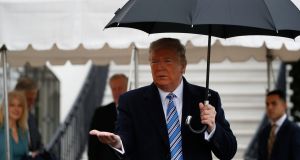 US president Donald Trump has said he is considering introducing a mandatory quarantine in New York, parts of New Jersey and Connecticut as the coronavirus continues to spread across the United States.

“We’re looking at it and we’ll be making decision. A lot of states who don’t have a big problem have asked me about it,” he said on Saturday, noting that there is concern about citizens leaving New York and going to other states like Florida. It follows his discussions with governors, including Florida’s governor Ron DeSantis this morning.

“We’d like to see NY quarantined because it’s a hotspot - New York, New Jersey, maybe one or two other places, certain parts of Connecticut quarantined. I’m thinking about that right now.” He added that it would be “short term,” possibly for two weeks in New York.

“The people of New York understand it better than anybody. They’ll be great,” he said, adding that he would be speaking to the governor of the state later in the day.

Mr Trump was speaking as he left Washington for Virginia, where he is due to witness the departure of US navy hospital ship USNS Comfort which is leaving for New York later on Saturday.

The United States has surpassed China in terms of the number of reported cases of covid 19, prompting warnings from the World Health Organisation that is likely to become the world’s next hotspot.

More than 111,000 people have now tested positive for the virus across the country, while there have been more than 1,842 deaths.

New York state continues to be the epicenter of the outbreak, with more than 26,000 cases reported in New York city alone. There are also concerns about rising numbers in California, Michigan and Louisiana.

Speaking at a press conference in New York on Saturday, Governor Andrew Cuomo, said while he had spoken to Mr Trump by phone, he did not know anything about a possible quarantine. “I don’t even like the sound of it,” he said.

Mr Cuomo said there was still a problem with testing in the US.

“We need many more tests, there are still people who cannot get tests,” he said, noting that other countries are developing home tests, and tests which deliver results quicker.

The demand for ventilators was also a continuing problem, he said, noting that states were now outbidding each other. He said that the federal government should buy ventilators and distribute by need. Alternatively, states could put together a voluntary consortium, and then distribute by need, he said.

He was speaking a day after Mr Trump invoked the Defense Production Act to compel General Motors to start producing ventilators, accusing the company of “wasting time.” The decision marked a remarkable shift in strategy by the president who on Thursday questioned whether New York’s request for 30,000 ventilators was excessive.

Mr Cuomo again on Saturday reiterated that the apex of the coronavirus will be next month, warning New Yorkers to prepare for a long period of self-isolation.

“This is not a sprint my friends, this is a marathon…This is going to be a long term situation, and even though it’s so disruptive and so abrupt and so shocking, it’s also long term. It’s a new reality, a shocking new reality. There is no easy answer.”

On Friday Mr Trump signed a $2.2 trillion stimulus package, the largest in American history, as Congress tries to bolster the economy.

An expansion of unemployment benefits, loans for businesses and specific aid for the airline industry are also included in the plan.