Speaking during his Fourth of July address in Washington, US president Donald Trump claimed that the revolutionary army "took over the airports" from the British in the late 1700s. Video: C-Span 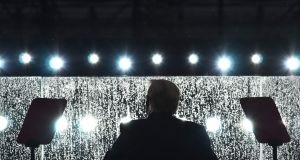 US president Donald Trump speaks during the “Salute to America” Fourth of July event at the Lincoln Memorial in Washington on Thursday. Photograph: Mandel Ngan/AFP/Getty Images

US president Donald Trump boasted that the US is “stronger today than it ever was before” as he delivered a long Independence Day speech that praised the country’s military – and included a reference to fictional airports during the 18th-century American Revolution.

Speaking from the steps of Washington’s grand Lincoln Memorial as part of his unorthodox July 4th celebration in the nation’s capital, Mr Trump appeared to stick to his prepared script, celebrating US “love and unity”, the “rugged American character”, and “the American spirit.”

The president then seemed to veer off script when, describing the creation in 1775 of a unified army during the revolutionary war, he said: “Our army manned the air, it rammed the ramparts, it took over airports, it did everything it had to do.”

On Friday, he told reporters that the teleprompter had been knocked out by rain during his speech, which was “not a good feeling”. “I knew the speech very well, so I was able to do it without a teleprompter. And it was hard to look at it anyway because there was rain all over it.”

Listing American achievements, which he said included the Super Bowl, the skyscraper, and the suspension bridge, Mr Trump paused occasionally to introduce and thank selected US citizens, and recounted the founding of America. He also vowed to soon “plant the American flag on Mars”.

“As we gather this evening in the joy of freedom, we remember that we all share a truly extraordinary heritage. Together, we are part of one of the greatest stories ever told – the story of America,” said Mr Trump, who broke with Washington’s July 4th traditions to make remarks to supporters on the Mall, who were soaked by the late rainstorm.

Calling acting defence secretary Mark Esper and chairman of the joint chiefs of staff Gen Joseph Dunford to the stage, Mr Trump began listing and praising each of the separate arms of the US military in turn, pausing only for polite smatterings of applause.

The president had come under fire over his demands to include tanks and military jets in the festivities this year, bucking the norms for the celebration, which sees hundreds of thousands of people gather for a night of fireworks and music.

“I think each time he gets around military troops and assets, he tends to politicise them and they get drawn more and more into his appropriation of the military for himself,” John Kirby, a retired admiral who served as the top spokesperson for both the Pentagon and the state department during the Obama administration, told CNN.

Following Mr Trump’s speech, fireworks were launched from the nearby West Potomac Park, instead of their usual spot on the Mall. The runways at nearby Ronald Reagan airport were shut down twice during the day.

The evening schedule was also delayed for about 35 minutes by a late-afternoon deluge.

Although several Trump supporters in the crowd on the Mall were wearing “Make America Great” hats, not everyone had turned out just to see Mr Trump speak.

Featured alongside the display of US military prowess on the Mall was a large inflatable balloon of Mr Trump styled as a baby, which anti-Trump protesters had been given permission to station near the Washington Monument.

The protesters were prevented from filling the balloon with helium and floating it off the ground by downtown Washington’s “no-fly zone” rules, however, leading them to complain that Mr Trump would not be able to see it as he delivered his speech. – Copyright The Financial Times Limited 2019