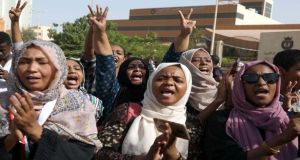 People celebrate in Khartoum on Friday after protest leaders agree a deal with the country’s military to share power until elections can be held. Photograph: Marwan Ali/EPA

Sudan’s protest leaders were on Friday celebrating a deal to share power with the country’s military until elections can be held as a victory for their revolution after months of demonstrations.

The Sudan Professionals’ Association, which spearheaded the nationwide protests, said it had come to an agreement with the so-called transitional military council. Under the deal, it said, a new sovereign council would be established made up of five military members and five civilians with an 11th member decided mutually. The council would initially be headed by a member of the military before rotating to a civilian leader.

The association said in a statement: “Today, our revolution has won and our victory shines.”

Thousands of people took to the streets of Khartoum, Sudan’s capital, to celebrate on Friday, although with access to the internet blocked, information about the power-sharing deal was scant.

“This agreement opens the way for the formation of the institutions of the transitional authority, and we hope that this is the beginning of a new era,” said Omar al-Degair, a prominent protest leader.

However, analysts cautioned that the deal might not be all it seemed and that the protesters, under pressure after months of activity and the massacre of civilians last month, might have been desperate to conclude an agreement.

The deal has the backing of the African Union, which had threatened to expel Sudan if the military held on to power.

“They haven’t revealed the nuts and bolts of this,” said Murithi Mutiga, a Sudan expert at the International Crisis Group. “It’s important to know that the Sudan regime is a past master at extending talks indefinitely and using negotiations to buy time and stay in power.”

Under the deal, the sovereign council – and a new legislature and technocratic advisers – would govern for three years, or a little more, until democratic elections can be held. That is a year less than protesters originally wanted since, they argued, it would take that length of time to restore democratic institutions hollowed out after three decades of military rule by President Omar al-Bashir.

Mr Bashir was ousted on April 11th in a bloodless coup, prompted by months of demonstrations.

The two sides also agreed to launch an independent inquiry into a massacre last month when troops belonging to the Rapid Support Forces, a government paramilitary group, killed more than 100 civilians, according to protesters, dumping some of the bodies into the Nile. The military admits to 61 deaths.

The RSF, a reconstituted version of the Janjaweed horseback militia that committed atrocities in Darfur in the west of Sudan, is commanded by Lieut Gen Mohamda Hamdan Dagalo, better known as Hemeti. It is unclear whether Lieut Gen Hamdan, considered by many to be Sudan’s de facto leader, will withdraw paramilitary troops from Khartoum, as protesters have demanded.

Demonstrations in Sudan began in December last year in response to price increases of basic commodities but quickly turned into a movement demanding the end of the Bashir regime.

Mr Mutiga at the International Crisis Group said the international community needed to be steadfast in insisting the military kept to its side of the bargain and that the sacrifice of protesters was not in vain.

“This will disappoint a lot of people on the street,” he predicted, when the full details of the deal were revealed. “But the protest movement might have thought this is the best they can get.” – Copyright The Financial Times Limited 2019