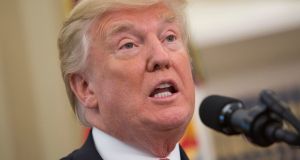 Donald Trump has complained about a Washington Post report that the Russian ambassador to the US said he discussed election-related issues with attorney general Jeff Sessions when the men met during the 2016 presidential race.

The US president tweeted on Saturday morning: “A new intelligence leak from the Amazon Washington Post, this time against A.G. Jeff Sessions.These illegal leaks, like [James] Comey’s, must stop!”

The Post on Friday cited anonymous US officials who described US intelligence intercepts of ambassador Sergey Kislyak’s descriptions of his meetings with Mr Sessions, who was a foreign policy adviser to Mr Trump and now serves as attorney general.

The Department of Justice said Mr Sessions stands by his previous assertion he never had conversations with Russian officials about any type of interference with the election.

A new INTELLIGENCE LEAK from the Amazon Washington Post,this time against A.G. Jeff Sessions.These illegal leaks, like Comey's, must stop!

So many people are asking why isn't the A.G. or Special Council looking at the many Hillary Clinton or Comey crimes. 33,000 e-mails deleted?

Mr Sessions had been Mr Trump’s first supporter in the Senate before being named attorney general, but recently has become a lightning rod for the president’s anger over the investigation into allegations of Russia’s meddling in the 2016 election. Mr Sessions recused himself from the investigation in March after having failed to disclose at his confirmation hearing that he had held meetings last year with Russia’s ambassador.

“So many people are asking why isn’t the A.G. or Special Counsel looking at the many Hillary Clinton or Comey crimes. 33,000 emails deleted...,” he wrote on Twitter. “My son Donald openly gave his emails to the media & the authorities whereas Crooked Hillary Clinton deleted (& acid washed) her 33,000 emails!”

The Federal Bureau of Investigation decided last year not to recommend criminal charges against Mrs Clinton for her email practices. Mr Trump fired Mr Comey in May.

In a tweet, he blamed the New York Times for foiling a US attempt to kill Islamic State’s leader.

On Friday, Gen Raymond Thomas, commander of US Special Operations Command, blamed a leak by a “prominent national newspaper” for spoiling a “lead” that could have led to the terrorist’s capture in 2015.