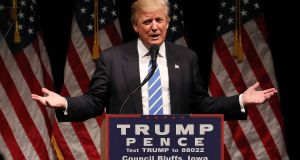 Donald Trump: “Everything you need to know about Hillary Clinton can be understood with this simple phrase: follow the money.” Photograph: Spencer Platt/Getty Images

US Republican presidential nominee Donald Trump has turned his sights on Irish businessman Denis O’Brien as part of his latest attack on Democratic opponent Hillary Clinton.

Mr Trump published a statement late on Wednesday drawing attention to Mr O’Brien’s close ties with the Clintons and the family’s charitable foundation, to which he and his mobile phone company Digicel have donated between $10 million (€9 million) and $25 million (€22 million).

Mr O’Brien’s spokesman told The Irish Times that the businessman would not be responding to Mr Trump’s statement.

In the subject line “Follow The Money,” the statement from the Republican’s campaign team consisted almost exclusively of extracts from media reports detailing the businessman’s connections with the former first couple, his work with former president Bill Clinton in Haiti after the 2010 earthquake and public controversies that have surrounded the businessman. 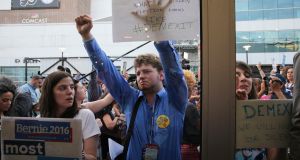 In pictures: On the road with Hillary 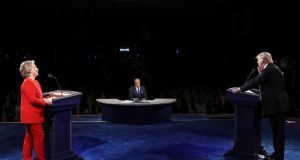 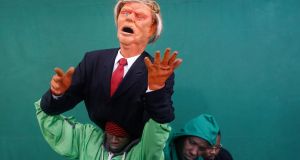 The statement was one of a number released by the New York billionaire’s campaign team aimed at raising questions about Mrs Clinton’s ties to Wall Street, hedge funds and other big business interests, marking a new aggressive line of attack for Mr Trump.

The release of the statements coincided with another fiery campaign-trail speech entitled, “Follow The Money,” in which Mr Trump attacked his rival candidate.

“Everything you need to know about Hillary Clinton can be understood with this simple phrase: follow the money,” he told his supporters, pointing to the money she and her husband have received from large companies for paid speeches and in contributions.

The Republican candidate’s lengthy statement about Mr O’Brien includes press clippings about the Irish businessman’s hosting of a dinner for Mrs Clinton on a visit to Dublin in 2012 and Bill Clinton’s travel to Ireland on a 2013 trip largely paid for by the businessman.

Mr Trump’s campaign team includes links to newspaper clippings about his legal actions against the Revenue Commissioners over his tax affairs relating to the sale of his telecoms company Esat, against the Dáil over comments made about his banking affairs with the State-owned Irish Bank Resolution Corporation by politicians and against the media.

They also draw attention to the controversy around the entrepreneur’s 2012 purchase of the construction company Siteserv and the write-off of company loans due to the defunct bank.