Trump accused of inciting attacks on journalists with tweet

US president Donald Trump has again attacked the news media during an event to honour military veterans in Washington on Saturday. Video: The White House 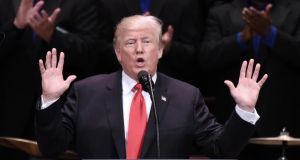 US president Donald Trump: “The fake media tried to stop us from going to the White House. But I’m president, and they’re not.” Photograph: Olivier Douliery/Bloomberg

US president Donald Trump was on Sunday accused of encouraging his supporters to attack journalists, after he tweeted a video of himself at a pro-wrestling event throwing to the floor a man with a CNN logo for a head.

The video, sent as CNN broadcast its Sunday talk show State of the Union, came the morning after an appearance from Trump at an event in Washington honouring veterans, in which he used his speech to further his attacks on the press and broadcasters. “The fake media tried to stop us from going to the White House. But I’m president, and they’re not,” he said.

CNN said in a statement that Trump was encouraging violence against reporters and “involved in juvenile behaviour far below the dignity of his office”.

A director of the Committee to Protect Journalists (CPJ) said “charged rhetoric online”, issued by the White House, “undermines the media in the US and emboldens autocratic leaders around the world”.

Trump’s tweet contained doctored video from his appearance on Wrestlemania XXIII in 2007, in which he “body-slammed” – and subsequently shaved bald – Vince McMahon, the WWE promoter and husband of Trump’s Small Business Administration chief, Linda McMahon. Trump is a member of the WWE hall of fame. The video appeared to have been taken from Reddit, where it was reportedlyposted by a usernamed “HanAssholeSolo”.

In an atmosphere of swirling distrust between journalists and the politicians they cover, “body-slamming” became a loaded term in May when a Republican congressional candidate in Montana slammed Guardian reporter Ben Jacobs to the floor.

Greg Gianforte pleaded guiltyto assault and was sentenced to community service. After donating $50,000 to the CPJ, he was sworn in as a member of the US House of Representatives. Jacobs’s glasses, broken in the assault, are now on display at the Newseum in Washington.

In its statement on Sunday, CNN said: “It is a sad day when the president of the United States encourages violence against reporters. Clearly, [deputy White House press secretary] Sarah Huckabee Sanders lied when she said the president had never done so.

“Instead of preparing for his overseas trip, his first meeting with Vladimir Putin, dealing with North Korea and working on his healthcare bill, he is instead involved in juvenile behaviour far below the dignity of his office. We will keep doing our jobs. He should start doing his.”

Courtney Radsch, advocacy director for the CPJ, said: “Singling out individual journalists and news outlets creates a chilling effect and fosters an environment where further harassment and even physical attacks are seen to be acceptable.

“We are already concerned about physical attacks on reporters and clearly the White House’s charged rhetoric online undermines the media in the US and emboldens autocratic leaders around the world. We already saw that there has been at least one serious attack recently, on Ben Jacobs, a reporter for the Guardian, and this does not create a positive environment for the press online or offline.”

On ABC’s This Week, homeland security adviser Thomas Bossert was asked if the president’s tweet could be seen as a threat or as encouragement for supporters to attack members of the media.

“Certainly not,” he said. “No one would perceive that as a threat, I hope they don’t. But I do think that he’s beaten up, in a way, on cable platforms.”

Trump was “the most genuine president and the most non-politician president that we’ve seen in my lifetime”, Bossert added. “Whatever the content is of that tweet or any particular tweet he’s demonstrated an ability to talk to the American people”.

Bossert was following a line pursued by senior officials and the president himself, that Trump’s use of Twitter allows him to speak directly to the public, bypassing media bias, and that his use of insult is only a response to provocation.

In the tweet, which was retweeted from the official @Potus account, the president wrote only: “#FraudNewsCNN #FNN.”

The tweet was issued shortly after the Nebraska Republican senator Ben Sasse told CNN’s State of the Union talk show: “There’s an important to distinction to draw between bad stories and crappy coverage and the right citizens have to argue about that and complain about that, and trying to weaponise distrust.”

Sasse, who said journalism in the age of social media was producing “a recipe for a new kind of tribalism”, spoke at the end of a week in which three senior CNN journalists resigned over a story that linked a member of the Trump transition team with the head of a Russian investment fund. Sasse said the departures were “a good thing”.

Trump, who has called the media “enemies of the American people”, subsequently included CNN in a series of angry tweets about “fake news”, including the network on a roster of enemies now including Joe Scarborough and Mike Brzezinski, MSNBC hosts who claim to have been the subject of attempted blackmail by White House officials.

On Saturday, Trump insulted “Crazy Joe Scarborough and dumb as a rock Mika”.

He later wrote: “The FAKE & FRAUDULENT NEWS MEDIA is working hard to convince Republicans and others I should not use social media – but remember, I won the 2016 election with interviews, speeches and social media. I had to beat #FakeNews, and did. We will continue to WIN!

“I am thinking about changing the name #FakeNewsCNN to #FraudNewsCNN!