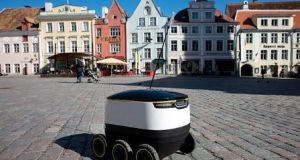 A robot by Starship Technologies on the streets of Tallinn, Estonia. The country’s focus on information and communications technology helped it become the birthplace of such companies. File photograph: Getty Images

Amid the fog of uncertainty over Brexit, a growing number of Britons are finding a route to remain in the European Union through a tiny country on the Baltic Sea.

Since Estonia regained independence from the Soviet Union 26 years ago it has become one of the world’s most digitised nations, and its 1.3 million people enjoy an almost paper-free relationship with the state that allows them to do everything online - from voting to filing court claims to receiving prescriptions.

Estonia has thrown open this system to the world through a ground-breaking e-residency scheme, which is seeing a surge of interest from people in Britain who want to retain at least a digital presence in the EU after Brexit.

I thought e-residency sounded like a cool thing, but as the Brexit referendum came closer it also became a kind of insurance policy for me

There are now about 20,000 e-residents of Estonia – including some 1,100 from the UK and 79 from Ireland – any of whom can create an Estonian company online and run it from wherever they are around the globe.

E-residents have already founded more than 3,000 firms, boosting Estonia’s economy through taxation and use of local business services.

“I thought e-residency sounded like a cool thing, but as the Brexit referendum came closer it also became a kind of insurance policy for me,” says Dirk Singer, the UK-based founder of digital marketing agency Rabbit.

“If Britain ends up outside the EU single market, a small creative business like mine will still want to be able to go for tenders and contracts in the EU, and a business in Estonia will be treated in the same way as one registered in Paris, Berlin or Dublin.”

In the week before the Brexit referendum last June, only three Britons sought e-residency. The following week 57 took the plunge, and the rate of applications from the UK remains twice as high as before the vote.

An online e-residency request takes about one month to check and process and costs €100. Some 99 per cent of applicants are approved and receive an electronic ID card to access online banking, taxation and other services via a data network secured by encryption. The ID card can be collected at an Estonian embassy, making it possible to become an e-resident of the country without even visiting it.

This programme was launched like a start-up, with a very small, lean team to test it out and see whether ‘if we build it they will come’. And people are coming

“Estonia created this amazing digital infrastructure but has only 1.3 million people here to use it. So along came the idea of scaling up Estonia by opening up that infrastructure to people around the world,” says Adam Rang, a spokesman for the e-residency project.

“This programme was launched like a start-up, with a very small, lean team to test it out and see whether ‘if we build it they will come’. And people are coming.”

Estonia has been described as a “start-up country” for the way it rebuilt itself along high-tech lines after 50 years of Soviet occupation.

The country’s focus on information and communications technology (ICT) helped it become the birthplace of Skype and other cyber success stories such as TransferWise, Pipedrive and also Starship Technologies, makers of a “delivery robot” that was recently tested by Tesco on the streets of London.

Raul Rikk, head of cyber security at Estonia’s e-governance academy, says his country was too poor in the early 1990s to buy off-the-shelf solutions, and so had to innovate.

“We were a small country with a bad climate in northeast Europe. We wanted to be part of the EU and Nato. But how would we compete in the big boys’ game?

You need a piece of paper to get married, divorced and for some property dealings. Everything else is online

“How would we survive and make things happen? We had to be very efficient, so we had to use ICT. And we began to invest,” he recalls.

“The technology existed, but the question was how to use it. We happened to choose the right policies. Some countries didn’t want to take the political risk of major change. But we were open to all kinds of change, because everything was changing anyway,” Rikk says.

“Now we use e-governance pretty much everywhere. You need a piece of paper to get married, divorced and for some property dealings. Everything else is online.”

Rikk and his colleagues are now helping countries from Ukraine to Mauritius to move major services online, though he admits that the work is, at least for now, “more about e-evangelism than making Estonia rich”.

Of the EU’s ex-communist members, only Slovenia has a higher average monthly wage than Estonia’s €1,150, but the ICT systems that power its economy are also a prime target for potential enemies.

Estonia’s online defences were tested by a massive cyber attack in 2007 that was widely attributed to Russian hackers. Now, vital data is backed up electronically by Estonian embassies around the globe and the country aims to activate the world’s first “data embassy” in Luxembourg early next year - allowing a virtual “reboot” of Estonia’s services and records if disaster were to strike its cyber infrastructure at home.

“Estonians are very open to change,” says Alice Chau-Ginguene (37), who lives in Dublin but co-runs Estonian baby sling firm Lova as an e-resident of the country.

She also has a cat-care business in Ireland, which she found “easy enough to start, compared to most other countries. But Estonia takes it to another level”.

“In Ireland we always hear about problems. People say we’re a small, new country, we were colonised for so long. But Estonia has those issues too. Now they’ve got their act together – here, if just the bus routes change everyone gets freaked out,” she says.

“Ireland should look at doing something like e-residency. We also have an English-speaking workforce, lots of software engineering, favourable tax schemes. The economy has felt ‘meh’ for a decade. Let’s be dynamic and try something new.”

Any such project would require the kind of joined-up thinking between political leaders and the private sector that has driven Estonia’s tech boom - and which meets Brexit and other challenges with innovative answers like e-residency.

“The English entrepreneur who is afraid of Brexit can find shelter from the storm here,” Estonian president Kersti Kaljulaid said earlier this year.

“If entrepreneurs build a superstructure for e-residents that is as awesome as the one they have built for e-Estonians, then Estonia will be among the winners of this century.”