Iraqis prepare to celebrate victory over Isis in Mosul 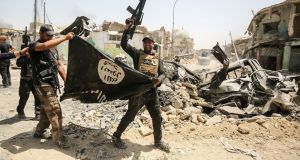 Iraqis prepared on Sunday to celebrate an expected victory over Islamic State (Isis) in Mosul, as battles continued to rage in the city in the last few districts where the Islamist militants are dug in.

Troops in Mosul tied white banners and Iraqi flags to lamp posts and damaged buildings, including the al-Hadba minaret, which the jihadists blew up in June along with the adjoining Grand al-Nuri Mosque, as air strikes and mortars rained down nearby.

It was from al-Nuri’s pulpit that Isis leader Abu Bakr al-Baghdadi declared his caliphate three years ago.

Authorities are planning a week of nationwide celebrations following the expected win, according to a government statement, and prime minister Haider al-Abadi is to visit Mosul to formally declare victory.

Mosul’s fall would mark the effective end of the Iraqi half of the caliphate that Isis declared in parts of Iraq and Syria.

However, the group still controls territory west and south of Mosul, where tens of thousands of civilians live.

Soldiers from Iraq’s elite Counter-Terrorism Service (CTS) retook the Makawi district of Mosul’s Old City on Sunday, a military statement said. The district is a few blocks from the western banks of the Tigris.

Reaching the river would give Iraqi forces control over the entire city and is expected by the end of this week.

A US-led international coalition is providing air and ground support to the offensive, which involves a multi-pronged attack by Iraq’s army and militarised police.

Federal police chief Lt-Gen Raed Shakir Jawdat said his forces had completed their mission in southern parts of the Old City on Saturday, but those areas still needed to be cleared of explosives and corpses from two weeks of fighting.

“Unfortunately, until now there are families besieged and there are many discarded enemy corpses, and unfortunately many civilians have been martyred, so we must remove them,” he told Reuters in western Mosul.

“The areas must be cleared of bombs. We must make the areas safe so that civilians can return.”

Nearly nine months of grinding urban warfare has displaced 900,000 Mosul residents, about half the city’s pre-war population, and killed thousands, according to aid organisations.

Thousands of residents are believed to be trapped in the Old City with little food and water, and no access to health services, according to those who managed to flee.

After CTS units captured the al-Nuri mosque complex on Thursday, Mr Abadi declared the end of Isis’s caliphate, which he called “a state of falsehood”.

Baghdadi has left the fighting in Mosul to local commanders and is believed to be hiding along the Iraq-Syria border, according to US and Iraqi military sources.

The group has moved its remaining command-and-control structures to Mayadin, in eastern Syria, US intelligence sources said last month, without indicating if Baghdadi was also hiding in the same area.

Baghdadi has often been reported as killed or wounded. Russia said on June 17th that its forces might have killed him in an air strike in Syria.

But Washington says it has no information to corroborate such reports, while Iraqi officials are also sceptical.