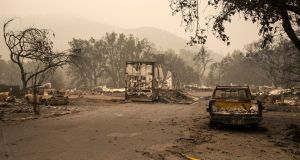 Burnt automobiles and a fire hose sit in a mobile home park on September 11th in Ashland, Oregon. Hundreds of homes in Ashland and nearby towns have been lost due to wildfire. Photograph: David Ryder/Getty Images

On the morning of Tuesday September 8th it was hot, and a 40-50km/h wind was blowing, which is a dangerous combination in a dry place. I was looking out of the windows in my kitchen when I saw a thin plume of smoke rising from the edge of town. Ashland is located in the Rogue Valley in southern Oregon, and it is a small tourist town famous for its Shakespeare festival, fine restaurants and multitude of wineries.

We live on a farm that is a seven-minute drive from the town centre. As I watched, transfixed, the fire grew huge at a furious pace. The smoke turned from grey to black and flames started advancing towards my home. Trying to stay calm, I packed valuables, papers and clothing, and corralled our pets for a hasty getaway.

My husband, Brian, was a 30-minute drive away crushing grapes at his winery in Medford, the county seat. That night it took him hours to get home. He had to use backroads as the highway was framed by fire and needed to be used by emergency personnel.

The fire raced down the valley and engulfed the little towns of Talent and Phoenix, where three close friends live. One fled her home with just a few belongings, and for the rest of the day and night she sat in her car and watched Phoenix burn. The next morning, shocked and exhausted, she came to my house.

They looked for lost pets on the outskirts of the fire zone, and tried to see whose houses had survived

Donation and distribution centres had sprung up like mushrooms around town, and one of the first was established by the theatre company. Restaurants fed stunned refugees. At a boutique giving away clothing my friend secured some brand new clothes. People were masked against the smoke as well as Covid, which has taken a heavy toll on the town’s economy; but it hasn’t dimmed the kindness and generosity of the people in this valley.

When we came home, my friend contacted her insurance company to lodge her claim,while I surfed the web to find financial aid and other resources. She ate little and slept fitfully.

Within 72 hours the people of the Rogue Valley were in full disaster relief mode. Families opened their homes to fire refugees. People offered free pet boarding and haircuts, and cooked meals. They helped victims to fill in insurance documents and get replacements for essential papers. They looked for lost pets on the outskirts of the fire zone, and tried to see whose houses had survived. More than 700 homes were gone.

Others volunteered at donation centres, translated for members of the Latino community, cared for lost animals at a temporary shelter and hosted livestock. A brigade of cyclists rode into the devastated areas to deliver water to people who had not evacuated.

I assisted at a veterinary clinic treating burn victims, most them cats, which hide rather than flee when threatened. Their burnt fur had turned orange, making it difficult for owners to identify them. I also joined a group of locals who were funnelling information onto a new Facebook page so that notices, offers of help and resources could be found at one location.

A refugee who lost her home and possessions asked me to see if her greyhound had been found. I located the greyhound, with burnt paws and muzzle, after 20 phone calls. I felt I had won a race.

Winemakers and vineyard owners donated grapes, barrels and time to a couple who had lost their tasting room and their entire wine inventory. Members of the Latino community took in fire refugees and looked after the out-of-school children of workers who are involved in the ongoing grape harvest so that they would continue to collect their wages.

Every day we get up and figure out what needs to be done, where we can be of use. Then we get on with the work

The fire-razed neighbourhoods of Phoenix remain off-limits to residents until downed electricity wires, leaking gas lines and toxic materials are made safe. Once this is done, cadaver dogs can find the remains of the dead. Meanwhile, refugees rely on aerial photos and videos to see if their homes are still there.

Although the temperature has dropped below 40 degrees and there is a slight wind, dense, dark smoke from other fires in Oregon and California blots out the sun and landscape. A choking, yellow pall hangs over the entire valley.

Every day we get up and figure out what needs to be done, where we can be of use. Then we get on with the work. A hush lies over the valley as we try to comprehend what has happened. Life in peaceful Ashland has totally changed.