Teddy Kennedy’s private battles with alcohol spill out in public 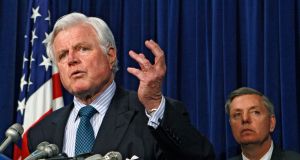 Senator Edward Kennedy giving a news conference about an immigration bill in Washington on May 16th, 2007. A new book about the late politician by his youngest son has provoked strife within the Kennedy family. Photograph: Jamie Rose/The New York Times

The real-life American soap opera that is The Kennedys continued this week with the latest episode being a very public row between immediate family members of the late senator Edward “Teddy” Kennedy over his drinking, and the reasons behind it.

Since his death in 2009, the veteran Massachusetts lawmaker, sibling to assassinated brothers John F Kennedy and Robert F Kennedy in a family blighted by personal tragedy, has been lionised as a figurehead of a bygone era of congressional conciliation at a time of poisonous political division in Washington.

Just last week, coinciding with the publication of illuminating transcripts for a University of Virginia oral history project on his life, Democrats and Republicans came together in one of the Senate buildings on Capitol Hill to praise Kennedy’s capacity to transcend personal animosities and deeper ideological differences.

The discussion was mournful not just for the passing of a great parliamentarian but for the loss of a spirit of constructive bipartisanship in Congress that ebbed away in Kennedy’s last decade.

Days after this reminiscing, a darker picture of Kennedy was painted by his youngest son, Patrick, in a new book, A Common Struggle: A Personal Journey Through the Past and Future of Mental Illness and Addiction, and interviews with him publicising its release.

The former Democratic congressman from Rhode Island, who retired from politics in 2011, goes so far as to say that his father would have been president of the United States, like his older brother, had there been “progressive mental health treatment for him” and someone close urging him to seek help for the trauma he had suffered.

“But no one could say that to my father, who had lost two siblings when he was a child and then had to survive the unthinkable: having not just one brother murdered in front of his eyes, and having it repeated over and over on television, but then having a second brother murdered, watching that repeated over and over and wondering if he was next. That is psychological trauma beyond comprehension,” writes his son.

The 48-year-old Kennedy portrays a raw and emotional image of his father in the tell-all book and writes with brutal honesty about his own battles with addiction to alcohol and drugs.

One low point for Kennedy, as recounted in the book, was when he travelled with Bill Clinton on his farewell presidential trip to Ireland in December 2000. He writes that there was a “pretty charged atmosphere” on Air Force One as they flew on the day the supreme court heard arguments in Bush v Gore, the case that would determine the next president. Emotions were running high and the drinks flowed.

“I was pounding rum and Cokes, and Jack and Cokes, while Martin O’Malley, then mayor of Baltimore, serenaded us with his guitar. And I remember, somewhere just before landing in Shannon, I was in the Air Force One bathroom again. This time, I was throwing up,” he writes.

“Of course I spent the next day with a splitting headache and feeling miserable, not at all enjoying what was an extraordinarily historic trip – the biggest official American trip to Ireland since my Uncle Jack went there in ’63. And I was just nursing my wounds for the rest of the trip. I felt humiliated once I sobered up and realised that I probably had made an ass out of myself.”

He was right about the reaction. His older brother, Ted jnr, said last weekend that he was “heartbroken” that his brother “chose to write what is an inaccurate and unfair portrayal of our family”. He described the narrative in his brother’s book as “misleading and hurtful”.

Patrick said that his mother, Joan, the late senator’s first wife who has herself fought alcoholism, had helped him with the book, but she too has come out publicly about it. “I had no knowledge that Patrick was writing a book and did not assist him in the project in any way,” she said in a statement released by way of her close friend, Margo Nash, a lawyer on Cape Cod.

Patrick Kennedy has not just broken a taboo of speaking publicly about the painful topics of mental health and addiction; he has also breached the Kennedy omerta by spilling more of the family’s secrets.