Suspect in Times Square bombing leaves a trail of mystery 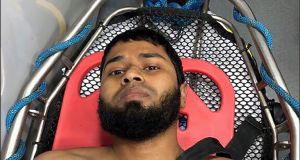 Akayed Ullah, the suspect in the New York subway terror attack on Monday, in an ambulance after he was apprehended. Photograph: Handout via The New York Times

On the surface, Akayed Ullah seemed to be an ordinary member of a Bangladeshi enclave in Brooklyn. He often prayed at a mosque in an unassuming brownstone in the Kensington section of the borough, where a few thousand of his countrymen reside. Like many immigrants in New York, he made his living – at least for a while – driving for a car service.

But on Monday morning, Ullah (27) strapped a pipe bomb to his body and set out to detonate it in a Times Square subway station, police said, not only causing chaos among crowds of commuters, but also leaving behind a trail of mystery that baffled those who knew him.

“He was a good guy,” said Mohammad Yousuf, a cab driver who prayed with Ullah at the mosque. “I can’t believe he would do anything like this.”

According to several law enforcement officials, Ullah said he set off the bomb in retaliation for US air strikes in Syria and elsewhere, targeting members of Islamic State. He told investigators that he had been radicalised online and had made a number of trips overseas in the past five years, visiting Bangladesh in recent months, one of the officials said.

Ullah admitted that he had looked up online how to build the bomb and had assembled it in his residence in Brooklyn, purchasing all of the materials except the pipe, which he said he found at a job site where he was working as an electrician in Manhattan, two of the officials said.

Immigration officials said that Ullah arrived in the United States from Bangladesh in 2011 on a family immigrant visa and has lived in Brooklyn ever since as a legal permanent resident. According to the terms of his visa, Ullah was the nephew of a US citizen and benefited from what the officials called “extended family chain migration”.

Records show that Ullah lived in a small, two-storey, brick-faced house. He and his family had been there for about seven years, said Alan Butrico, a businessman who owns the house next door. In the last few years, Butrico said, he had some unpleasant encounters with Ullah. They largely revolved around parking.

On Monday morning, police officials, including some from the bomb squad, descended on the house, surrounding it in yellow crime-scene tape. Officers and federal agents also appeared at another Brooklyn address associated with Ullah.

According to census statistics compiled by Queens College, Kensington is home to more than 3,000 Bangladeshi-born New Yorkers, making it the largest Bangladeshi enclave in Brooklyn. Mian Quadry, a representative of the Bangladesh Muslim Center in Kensington, said he did not know Ullah, adding, “This is not what and who we are.”

“The Kensington community we have,” Quadry said, “it’s people who work very hard just to provide for our family.” Outside the Ocean Parkway building on Monday evening, Albert Fox Cahn, legal director of the New York chapter of the Council on American-Islamic Relations, said the group was “heartbroken by the violence that was targeted at our city today and by the allegations being made against a member of our family”.

The Masjid Nur Al Islam mosque in Kensington, which Ullah was said to have attended, was closed on Monday. One man, who has worshipped at the mosque for 15 years and gave his name only as Mohammad, said Ullah prayed there regularly, especially during Ramadan. Ullah, Mohammad said, was close to the mosque’s imam and was often seen with him at afternoon prayers. But Yousuf, the cab driver, said he had not seen Ullah at the mosque in the past five or six months.

From 2012-2015, Ullah held a licence issued by the city to drive for-hire vehicles, city officials said. The officials were unable to say if Ullah had driven a yellow cab or for a private service like Lyft or Uber. It was also unclear, they said, if he had his own car or drove for an employer.

Police officials in Bangladesh said on Monday that they had never heard of Ullah, and the country’s embassy in Washington issued a statement declaring a “zero tolerance” policy toward terrorism. “A terrorist is a terrorist irrespective of his or her ethnicity or religion,” the statement said, “and must be brought to justice.”

Condemnations of the bombing did little to lessen the confusion in Ullah’s neighbourhood. “Nothing surprises me anymore today,” Butrico said. “You don’t know who your neighbours are. Can’t trust nobody anymore.” – New York Times