More evacuations as wildfires advance on coastal towns in California 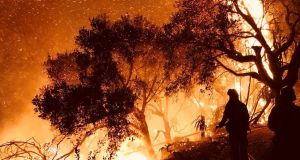 Firefighters tackle flames as they advance on homes in Carpinteria, California. Photograph: Reuters

The largest California wildfire advanced on coastal towns near Santa Barbara on Sunday, stoked by the gusty winds and dry conditions that have fuelled destructive blazes across the state’s southern region.

Authorities ordered residents in parts of Carpinteria and Montecito to evacuate early on Sunday as the Thomas Fire edged closer to the city of Santa Barbara, about 100 miles (160 km) west of Los Angeles. The blaze has already blackened 155,000 acres (62,726 hectares) and consumed hundreds of structures.

Some half-dozen fires have raged across California since early last week.

At least one home in Carpinteria burned down on Sunday, the Santa Barbara county fire department said. The fire was only 15 per cent contained as of Sunday morning, according to the California Department of Forestry and Fire Protection.

Top wind speeds were forecast to increase to 55 miles per hour (89 km per hour) on Sunday from 40 mph (64 kph) on Saturday, according to the National Weather Service. The gusts, coupled with the rugged mountain terrain above Santa Barbara and Ventura counties, have hampered firefighting efforts, authorities said.

The fires raging across Southern California have forced the evacuation of some 200,000 people and destroyed nearly 800 structures. A 70-year-old woman died Wednesday in a car incident as she attempted to flee the flames in Ventura County.

The Thomas Fire, the largest of the infernos, had left nearly 90,000 customers without power as of early Sunday morning, Southern California Edison said on its website.

The 8,5000 firefighters battling the fires that have burned over the past week gained some ground on Saturday.

North of San Diego, the 4,100-acre (1,659 hectare) Lilac Fire was 60 per cent contained by Sunday. A brush fire broke out Saturday night in the city of Monrovia in Los Angeles County, prompting temporary evacuations, the US Forest Service said on Twitter. A group of boy scouts camping in the area were among those evacuated, the Los Angeles Times reported.

Crews knocked down the 3-acre (1.2 hectare) blaze and no structures were reported damaged, the city of Monrovia said on its website.