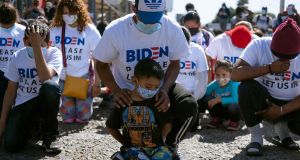 A developing situation at the US-Mexico border may present Joe Biden with one of the earliest challenges of his presidency. In recent weeks there has been a surge of migrants crossing the border, many of them unaccompanied minors.

Senior administration officials have been dispatched by Biden to visit the region in the coming days to assess a rapidly deteriorating situation.

The influx has led to the reopening of a facility in Carrizo Springs, Texas that was used by the Trump administration – a move that has alarmed many. Donald Trump’s decision to separate children from their parents at the border was one of the most controversial policies of his four years in power.

Images of children, caged and alone in unsanitary conditions shocked the world, becoming a symbol of Trump’s zero-tolerance approach to immigration.

Responding to questions this week, White House press secretary Jen Psaki insisted that the use of the Carrizo Spring facility was temporary. She said capacity at existing Office of Refugee Resettlement shelters, which house children after they are processed by Immigration and Customs Enforcement, has been reduced due to Covid-19 protocols.

As a result, the department of health and human services reopened an emergency facility to house the children temporarily, she said.

“It’s a temporary reopening during Covid-19. Our intention is very much to close it, but we want to ensure that we can follow Covid protocols as unaccompanied minors come into the United States. ”

The escalating situation at the border also presents an early challenge for Biden’s recently-confirmed secretary of homeland security. Cuban-born Alejandro Mayorkas is the first immigrant to lead the agency. An experienced lawyer and law enforcement official, he served as deputy secretary at the department during the Obama administration.

Asked this week if there was a crisis at the border, Mayorkas replied: “The answer is no. I think there is a challenge at the border that we are managing.”

He insisted that the White House was adopting a different policy to that of the previous administration, noting that children were sent back to Mexico under the Trump presidency.

Mayorkas chairs a new Reunification Task Force that aims to reunite children and parents who were separated by the previous administration. The taskforce is liaising with lawyers for the separated family members, as well as authorities in El Salvador, Guatemala, and Honduras.

“The moral imperative is to reunite the families and restore them to the fullest capacity that we, as the United States government, can do,” he said.

Nonetheless, the situation at the border has been seized on by conservative news channels, who have criticised Biden’s decision to stop construction of the Mexican border wall.

Texas governor Greg Abbott, who controversially eased Covid-related restrictions in his state this week, has also – without evidence – accused migrants of bringing coronavirus into the state.

Already, Biden is eyeing an ambitious immigration package. The plan, unveiled last month, includes a path to citizenship for the US’s undocumented residents. However, Democrats in Congress are unlikely to progress the legislation this month amid divisions within their own caucus about the scope of the plan.

A piecemeal approach to immigration reform is more likely; this could entail a specific solution for so-called “dreamers,” young people who were brought to the US illegally as children. Additionally, it could offer an opportunity for Ireland to advance its bid to be included in Australia’s E3 visa scheme.

With a long path ahead to secure immigration reform, Biden may first need to resolve the increasingly challenging situation unfolding on the Mexican border.