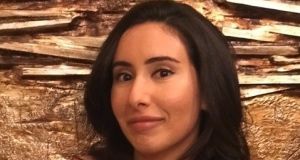 Princess Latifa al-Maktoum: Claims to have been held in captivity by her father since 2018. Photograph: EPA/Free Latifa Campaign

Princess Latifa, a daughter of Dubai’s ruler who claims to have been held in captivity by her father since 2018, has asked UK police to reinvestigate the kidnapping more than 20 years ago of her sister, Princess Shamsa, according to a letter reported by the BBC.

The BBC reported that in a letter handwritten in 2019 – but passed to Cambridgeshire police on Wednesday – Latifa says the police may be able to free Shamsa, who was abducted on the orders of her father when she was 19.

“Your help and attention on her case could free her,” Latifa reportedly wrote.

On Sunday, the United Nations asked the UAE for proof that Latifa was alive, following the release days earlier of secretly recorded messages in which she said: “I’m a hostage. I am not free. I’m enslaved in this jail. My life is not in my hands.”

The BBC reported that Latifa had dated her letter about her sister’s kidnapping 2018, “before her escape attempt, to avoid revealing that she had a way of communicating with the outside world from captivity”.

Princess Shamsa was snatched from the street in Cambridge in August 2000 after visiting a bar with friends. The previous month, Shamsa had fled her father’s Longcross estate near Chobham, Surrey.

In an email Shamsa later managed to smuggle out from captivity in Dubai to an immigration solicitor from whom she had sought advice about remaining in Britain, Shamsa alleged: “I was caught by my father, he managed to track me down through someone I kept in touch with.

“I was caught on the 19th August, in Cambridge. He sent four Arab men to catch me, they were carrying guns and threatening me, they drove me to my father’s place in Newmarket, there they gave me two injections and a handful of tablets, the very next morning a helicopter came and flew me to the plane, which took me back to Dubai. I am locked up until today.”

Cambridgeshire police launched an investigation into the kidnapping in 2001, the BBC reported, but “the investigation eventually hit a dead end when officers were blocked from going to Dubai”.

The investigation was reviewed in 2018 and again in 2020. The police said in a statement to the BBC that the new letter “will be looked at as part of the ongoing review”. – Guardian